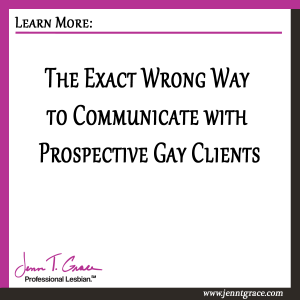 A quick note from Jenn – When my dear friend and colleague Diane reached out to me upset with what she had just read I was empathetic. However, rather than voice my thoughts on the matter I invited her to share her thoughts and opinion here on my blog. It is my intention for this to be an educational moment for how truly important having good communication skills with the LGBT community is.

This is a guest post written by Diane K. Fisher

I have attached an article that was written for “On Wall Street” a trade publication that I subscribe to entitled “3 Tips for Advising Same –Sex Couples.” I was so appalled by the article as both a lesbian and as a Financial Advisor that I emailed the author immediately after reading it. This is very uncharacteristic of me because I feel that everyone is entitled to their own opinion, however, I was so offended I needed to respond. With this being said, I would like to share with your followers the article and some of my response back to her which follows.

And now here it goes:

The reference to gay lifestyles is totally insulting. It is not used in the gay community and it is offensive. Is there such a thing as “straight lifestyles?” Secondly, we are all the same and should be treated as such. We may have different financial objectives, our state laws may not be the same, and goals may vary. However, telling advisors that they should not speak to same-sex couples the same as straight couples is offensive also. Different history- what does that mean and what would it matter?

I am an Accredited Domestic Partnership Advisor, and believe it or not, a lot of my planning has been with straight domestic partners. The laws for them were originally the same as same-sex couples until Connecticut passed gay marriage. I do not speak to them any differently because of their situation-the same should be true for same sex couples.

And lastly, the most offensive part of your article is “Be curious.” How are there more variations as to how same-sex couples make or manage money because there are no gender roles to contend with? I don’t even know what that means, never mind the fact as to what is has to do with, in regards to building wealth. But the kicker? Same-sex couples make it up as they go along. My spouse and I don’t make up anything as we go along. What could you possibly mean by this statement?

Jenn- I know that the author’s intent was not to offend the LGBT Community. But, I did suggest to her that if she is going to write an article on a topic that she knows nothing about that she needs to seek an expert in the field. I suggested that she purchase your book since I learned quite a bit from it and I AM a lesbian.

I hope your followers know that there are many Advisors available to them that DO understand their needs. And, if you don’t find one on the first try-keep looking!

1 comment to " The Exact Wrong Way to Communicate with Prospective Gay Clients. "