Why Making Assumptions is a Critical Mistake in your Gay Marketing Efforts
by Jenn T. Grace Allies, Business, Coming Out in the Workplace, Communications, Community, LGBT, Marketing to the LGBT Community, You Might - Plan to Reach 4 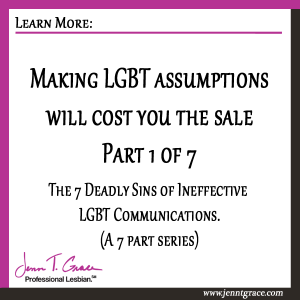 Welcome to part 1 of the 7 part series titled: “The 7 Deadly Sins of Ineffective LGBT Communications.” Previously I introduced you to the concept that I believe 98% of miscommunication blunders occur for one of 7 reasons, which I’ve dubbed the 7 deadly sins.

I truly believe that most people come from a place of good intention and don’t wake up wondering whom they can offend throughout the day. When it comes to gay marketing and reaching out to the LGBT community in a truly authentic way you must really pay attention to the way you are communicating.

[Tweet it Out] When it comes to gay marketing you must really pay attention to the way you are communicating http://bit.ly/1aFdJ5t @Jenntgrace #lgbtbiz

Let’s discuss Deadly Sin #1 – assumptions. Have you heard the old adage “Never assume – you make an ass out of you and me.” I learned that lesson as a child from my dad and it is something I have remained conscious of throughout my life. Assumptions are bad news. Period.

When deciding how to reach the gay market you must never make assumptions, ever. Let’s first define what ‘assume’ means. According to Merriam-Webster, to assume means: to think that something is true or probably true without knowing that it is true. That seems like a reasonable definition to me.

So here are 3 examples of how making assumptions will reflect poorly on you and your business.

#1: Assuming the gender of someone’s spouse.

This is something I see happen a lot. As I stated above I don’t think people start the day wondering who they can offend but often it just unravels from one poor judgment. This example is one of the easiest to fall victim to. To make this point simply – imagine you and I are having a conversation over coffee. You see I have a wedding ring on but we don’t know each other. You comment on how beautiful my ring is and then say “He’s one lucky man!” In a seemingly harmless statement you’ve now put the burden on me to either a) correct you and say actually I’m married to a woman or b) glaze past the fact that you said that since I don’t know you well and move on to another topic. If this were a business meeting and you were trying to build a rapport with me making an assumption like this that makes me uncomfortable isn’t going to help you. I’ve written in more depth on how you can avoid a situation like this, check it out here.

#2: Assuming that because your co-worker is gay that they must have ‘Gaydar.’

Gaydar is one of those mysterious things. It is something I am always looking to crack the code on. Wikipedia defines Gaydar as “Gaydar (a portmanteau of gay and radar) is a colloquialism referring to the intuitive ability of a person to assess others’ sexual orientations as gay, bisexual or heterosexual. Gaydar relies almost exclusively on non-verbal clues and LGBT stereotypes.” If you are in a business setting and you assume that your gay co-worker is going to know every other LGBT person in the company you are going to look like an ass. Replace LGBT with any other minority group and you’ll see how foolish it would be. It’s like saying every Indian person in a company of hundreds of people knows every other Indian person. It’s an ignorant statement and a poor assumption. I’ve written in more depth on Gaydar specifically, you can read it here.

#3: Assuming that someone either is or isn’t part of the LGBT community.

You can never be certain as to who is or isn’t gay. If you make a broad assumption that someone ‘doesn’t look gay,’ but actually is, then you look like the fool. Also, if you make the assumption that someone does ‘look gay,’ but isn’t, you equally look like a fool. I wrote about a specific incident where someone being assumed she was a lesbian was the impetus for quite a big problem for her business. You can read it here. 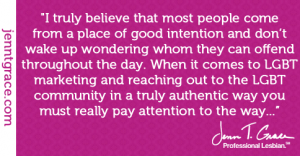 Throughout this 7 part series I know for a fact some of you reading this are going to be scratching your head saying, “Would someone really say that?”  “No, people don’t have the nerve to say something so terrible!” My response to you is yes they have and yes they will continue to.

Often people really don’t understand how offensive what they’ve just said sounds. I take it as my responsibility to listen to what they are saying and try to decipher what they really mean and give them the benefit of the doubt. This is not how the majority of the gay market operates which is why it is so imperative to think before you speak.

Do you think you have something to add to this list of assumptions? If so, leave a comment below and perhaps it’ll become a future blog post!

2 comments to " Making LGBT assumptions will cost you the sale "