Why does the LGBT community seemingly hate its allies?

Home » Allies » Why does the LGBT community seemingly hate its allies? 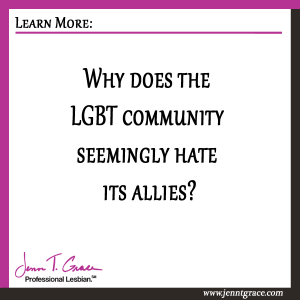 A prior year’s Grammys performance sparked this blog post about something I had already been aware of, but was reinforced strongly during that performance – our LGBT allies are under appreciated.  Thousands of people blogged about that performance a few years ago- this post isn’t like the others. Honestly, some LGBT folks are probably going to be angry with what I have to say, but honesty is at the core of who I am, so I’ll take the heat for my beliefs.

If you haven’t seen the Macklemore, Ryan Lewis, Queen Latifah, Mary Lambert and Madonna performance from the Grammys, you can watch it below. I recommend staying tuned for all 7:25 of it. It’ll help give context to my thoughts. Really listen to the words of the song.

Okay, so here’s the deal – the performance was monumental on so many levels that I could take this post into a hundred different directions but I am going to focus on one specific message – We need our Allies. Period.

Guess what? I shared those questions too but you can find those answers elsewhere. What I want you to think about is the impact that the performance had on LGBT Americans (and other countries I’m sure.) To me something happened, something significant. On prime time television people of all walks of life, whether they are pro-LGBT or anti-LGBT were exposed to a cultural awareness shift. Queen Latifah, in a quasi-haphazard manner, married 33 couples during the Grammys, many of which were LGBT couples. While this is clearly over the top, I won’t argue with that, this demonstration showed a unity for marriage equality.

If you did not know this Macklemore & Ryan Lewis are both allies to the LGBT community meaning neither of them identify as being gay. (You can read this post for more on what an ally is.) During the performance I was on Twitter watching the conversation. There was a ton of positive commentary about it, and plenty of negative too, surrounding allies. I grabbed a few Tweets to illustrate my point.

These are just a few examples of people within the LGBT community who are upset by an ally having a voice and speaking out on behalf of the community. I am of the mindset that allies are one of our greatest assets – so why are we demonizing them for trying to do good and improve the quality of life for LGBT people everywhere?

Now imagine you are a gay teen

Now imagine, for just a moment, that you are a gay teen living in Nebraska. You are in the closet. No one knows that you are gay – not even your best friend of 10 years. In your experience it’s just not okay to be gay in Nebraska. There are LGBT teens all across America and beyond who are struggling to survive, who have suicidal thoughts. Statistics show that LGBT teens are 2-5 times more likely to be suicidal than their straight peers.

Now as that closeted gay teen in Nebraska you see the performance at the Grammys. Do you think for a single moment your thoughts would be “Ugh, I can’t believe Macklemore! How dare he call himself an ally, he doesn’t represent me or the LGBT community!” I have a hunch that your answer is no.

I suppose in a way the LGBT community is making great strides by the mere fact that I have to even write about this. A Twitter conversation I had included this line “Oh yes. Pretty powerful IMO that the mvmt has come so far that we can have a debate about the role/relevance of straight voices!”  This is such a valid point. But honestly, I would much rather not see our community divided over allies having voices. We should be grateful to have allies who are helping move the movement forward.

There’s more work to do

There is still so much work to be done – are we discouraging other allies from speaking up for the LGBT community given the way some have gone after outspoken allies like Macklemore? I truly believe the musical performance of one ally saved the life of at least one suicidal LGBT teen. With the potential power allies and LGBT alike have – how can we in good conscience crucify an ally – whether they are famous or not? It’s time we start coming together as a community instead of tearing each other down.

For the many, many, many allies reading this… regardless of what you have seen or heard someone say about being an ally – allies are good. Don’t be discouraged – keep on being an ally because we need you.

21 Responses to Why does the LGBT community seemingly hate its allies?