Deconstructing gaydar: Why do I know she’s a lesbian?

Home » Day-to-Day-Life » Deconstructing gaydar: Why do I know she’s a lesbian? 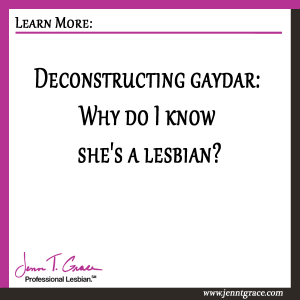 Often times in this blog I’ll address questions I’ve been asked by friends or colleagues. But in this post I’d like to attempt to answer my own question by brainstorming in writing with you. It may sound a bit crazy but I’ve been racking my brain for a while trying to figure out – why do I know she’s a lesbian? Let me go back a few months.

Awhile back, I wrote a post titled “Don’t assume that because your co-worker is gay that they have ‘gaydar’” In this post I outlined the many reasons why assuming your co-worker has gaydar probably won’t be a benefit to you in the workplace but rather potentially harm your relationships. I still believe that you cannot make generalizations or assumptions around colleagues and co-workers sexual orientation or gender identity. However, that doesn’t change the fact that some LGBT people are able to identify other LGBT people just by looking at them.

In June 2007, I read an article titled ‘The Science of Gaydar’ in New York Magazine. It was absolutely fascinating. The article goes into scientific data on the way a gay man’s hair swirls to one direction over another, it talks about finger prints, the length of one finger over another and even lefties versus righties. The article is very long but well worth the read. The article aims to prove that there is such thing as gaydar. What we do know is that gaydar relies on a lot of stereotypes that I’d rather not perpetuate. But where I am stumped is how do I know when someone is a lesbian when she does not exhibit any of the traditional stereotypes you would expect?

Every time I run into someone over the last few months I’ve been really thinking hard as to why I know their sexual orientation at a glance. I’ve been convinced there has to be something there other than ‘gaydar.’ So, a few days ago I was standing in line at the CVS Pharmacy in my town. I saw the pharmacy technician who was cashing the woman out in front of me and I instantly thought, she’s a lesbian. She was dressed in a lab coat and nothing about her appearance fell into a stereotype you would expect. So why do I know this woman is a lesbian? I’m not sure. But what I do know is that when it was my turn I noticed her rainbow bracelet as she lifted up her hand. A rainbow bracelet I wasn’t able to see from where I was before and spotted her to be a lesbian.

I’m truly at a loss for how I, and other LGBT folks, are able to identify others from the LGBT community – especially when there is no specific stereotype associated with the person. I’m hoping to one day crack that code for myself. Every time I have this type of situation happen I start to think, if I were marketing a product to this particular person – how would I find he or she? I’ve had countless people ask me “Where are the lesbians?” Lesbians appear to be more elusive and more difficult to market to. That’s a question I don’t have a solid answer to but one I have some thoughts on. Stay tuned for next’s week post where I share those insights.

6 Responses to Deconstructing gaydar: Why do I know she’s a lesbian?