What's the business impact of ridiculous proposed laws like Arizona's Senate Bill 1062
by Jenn T. Grace Coming Out in the Workplace, Community, Day-to-Day-Life, LGBT, Marketing to the LGBT Community, You Might - Etiquette, You Might - Workplace Equality

A few years back I was in a Facebook conversation with a friend about the ridiculous nature of Arizona’s Senate Bill 1062. I was so intrigued by her comments that I told her to head over to my Facebook page and post there so we could get the conversation going with other people too! I promised I would write about it in my blog. Below is the dialogue that ensued. I encourage you to read the exchange but you can skip past it and go right to my opinions on the matter if you’d like too.

***Warning there are some obscenities*** 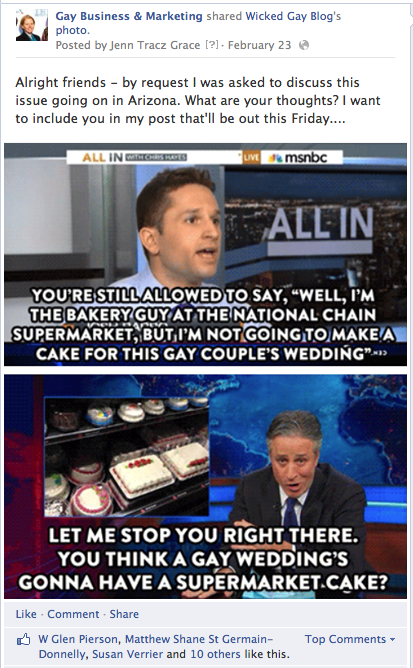 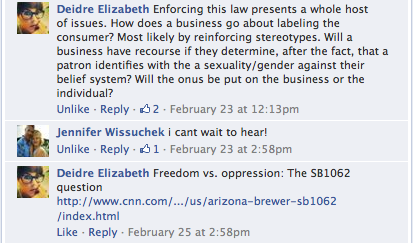 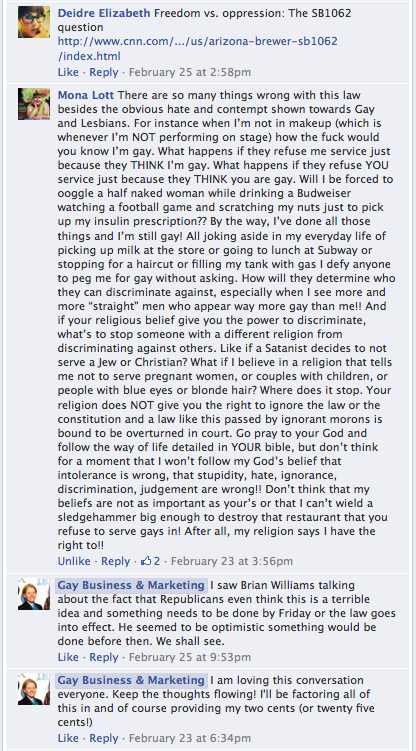 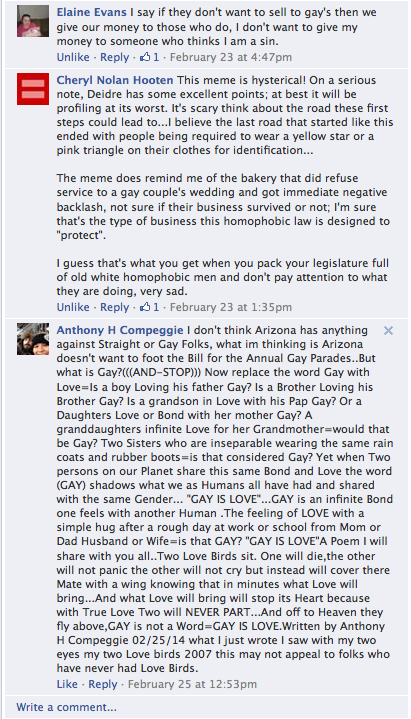 So there are some thoughts from fans of my Facebook page. While the debate was raging across our country I had really strong emotions about the outcome if the bill were to pass. Fortunately the bill was vetoed. This bill would have wreaked havoc on the LGBT community of Arizona and been an entree into other dangerous areas for LGBT folks. This blog is about gay business and marketing, so rather than write a nonsensical tirade against the right which is my natural desire, I will stick to the business and marketing component of what is happening.

This radical bill made its way to Governor Brewers desk and before it got there it worked its way through the rest of the legislative body with little to no resistance. But while this heinous bill didn’t make its way into law there are a multitude of other issues that Arizona and many other states are dealing with.

In Arizona and 28 other states LGBT discrimination by private businesses remains lawful. Yes, you read that correct. You can legally discriminate based on sexual orientation in 29 states! This translates into if someone wants to fire you because you are gay, lesbian or in a same-sex marriage, then they can do it and you have no legal recourse under state law. 29 states people!

You’ve heard me talk about ENDA before, the Employment Non-Discrimination Act. This would make it illegal to fire someone on the basis of sexual orientation on a federal level. In those 29 states under federal law it is illegal to fire someone for their race, sex, disability, veteran status, and religion. Yet sexual orientation is not included. Former Speaker Boehner wouldn’t allow ENDA to the floor for a vote. The Senate passed ENDA with bi-partisan support.

What I am saying here is that in truth, if an Arizona business owner wanted to refuse an LGBT person service, they could probably get away with it. They can certainly get away with firing you or not hiring you, so refusing you service doesn’t seem like a far stretch with or without Senate Bill 1062 in place.

There are some Arizona cities like Phoenix and Tucson that have passed municipal laws that protect sexual orientation but 2 cities out of how many in the state is clearly not enough. This is a civil rights issue and its a business issue. There are many reasons why discrimination in the workplace isn’t good for business. I have a previous blog post you can read for more thoughts on that.

One of the comments in the Facebook conversation above indicates the biggest impact LGBT folks can make – no sane LGBT person is going to do business with a company that would like to refuse them service. There are many options for whatever product or service one might be looking for – that there is no logical need to patronize an establishment that disapproves or thinks my marriage is sinful. To hell with that.

Here is the real opportunity. For every one of you reading this right now… you have the opportunity to be on the right side of history. To support the LGBT community. If you are a gay business owner get your name out there to your community, let them know you are in business and you want their business because you care. If you are a straight ally reading this, the same applies to you. Get your name out there and begin your marketing campaign on the grounds that this type of discrimination is ridiculous. LGBT people will continue to buy from LGBT-friendly establishments. The buying power of the LGBT community is $830 Billion dollars. That is nothing to scoff at. The brand loyalty numbers within the community are significant. Read this blog post to see all of the figures.

Moral of the story – you want to discriminate against the community, go right ahead because there are more people doing the right thing, who are not discriminating who are going to reap every ounce of reward.