What is so symbolic about the rainbow within the LGBT community?

Home » Communications » What is so symbolic about the rainbow within the LGBT community? 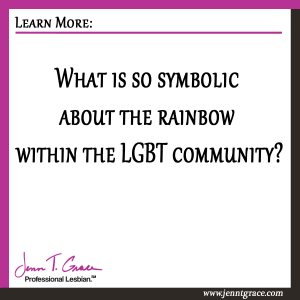 During a meeting I was talking about pride parades and made a comment about rainbows. One of the people I was sitting with said “I had no idea rainbows are a sign of gay pride.” It never occurred to me that people wouldn’t know that rainbows were a symbol of lesbian, gay, bisexual and transgender (LGBT) pride but this conversation demonstrated otherwise. It strikes me that if you are unfamiliar with the rainbow being a symbol of LGBT pride then perhaps you aren’t 100% familiar with what LGBT stands for. If so, take a look at the blog post;  “Pardon my ignorance but what is LGBT?”

I’d like to give you a brief history of how the rainbow flag came to be a symbol of LGBT equality. Then I’ll mention a few ways you can use the rainbow symbolism to your advantage in business.

A Quick History of the Rainbow Flag

In 1974, an artist named Gilbert Baker had a life changing experience when he met Harvey Milk, a pioneer in LGBT rights.  Harvey Milk has an incredible story so if you are interested in it, you can read more here. Within three years of Baker and Milk meeting, Milk was elected to the San Francisco Board of Supervisors. This was monumental because Milk was

the first openly gay person to hold public office in a major city in the U.S.

After the election Gilbert Baker came up with a new symbol of LGBT pride at the urging of Milk to do so. Previously the symbol that existed was the pink triangle which was the Nazi’s way of branding LGBT people during the Holocaust. Not a warm and fuzzy feeling of pride. Although the LGBT community has since claimed the pink triangle as a way of empowerment versus what it originally stood for.

So Baker created the pride flag out of rainbow colors. Each color stood for something specific to show the diversity of the community.  Hot pink stood for sexuality, red for life, orange for healing, yellow for the sun, green for nature, turquoise blue for art, indigo for harmony and violet for spirit. The flag is now just 6 colors and there is a specific way of displaying it which is with the red stripe being at the top. In 1979, the rainbow flag was draped all along Market Street in San Francisco for the Gay Freedom Day Parade and it instantly caught on as a symbol of the community.

To further the strength of the rainbow symbolism, in 1988 a gentleman in West Hollywood, CA was sued by his landlords over the right to hang his rainbow flag on the balcony of the apartment. He won the court case and it was during this time that the flag really began to mean something more than just pride. It meant you were taking a stand for LGBT rights. LGBT rights still have quite a ways to come even now but at this time standing up and displaying the rainbow flag meant you were taking a stand.

That was then – this is now.

Sure, in many circumstances putting a rainbow flag on your retail shop window will help. If you walk down the streets of Provincetown, Mass. or Northampton, Mass. you’ll see the streets and shops lined with rainbow flags. They are both New England meccas for the LGBT community. Similarly in San Francisco, CA or Palm Springs, CA on the West Coast you’ll see plenty of support for the LGBT community via the usage of the rainbow.

But what about in the towns, cities and states where LGBT pride isn’t part of the ‘social norm’? Or in areas where kids and adults alike still need to hide who they are? This is still very common in our society. As a business owner in one of these areas you could place a rainbow flag, sticker or sign on your store front and get the attention of LGBT people walking by. Those who know that the rainbow is a symbol of LGBT pride will actively seek you out. Those who don’t know the rainbow flag is a symbol of the LGBT community wont notice and it won’t effect them.

I grew up in Rhode Island which is part of the six New England states but it is very much behind in terms of LGBT equality compared to those around it. In the town I grew up in there was a diner who proudly hung a rainbow flag outside the restaurant. It was like a hidden gem of the community (at least for me). Those who saw it knew the diner was owned by a lesbian couple, but the average person had no idea. In instances like this, in a small town setting, putting up a rainbow flag will show that you are open and LGBT-friendly.

I’ve written quite a bit in the past about what a corporation needs to do to set itself apart in terms of LGBT workplace equality. Here are two blog posts that I think will give you some additional insight.

Regardless of whether you are the small town business owner or the manager in a large corporation just by you being here and reading this blog shows that you are looking to set your company apart in regards to LGBT equality. Please continue to poke around the site and find additional information to help you on your way. If you have a specific question please reach out and ask!