What is a "Beard"?
by Jenn T. Grace Guest Post, LGBT 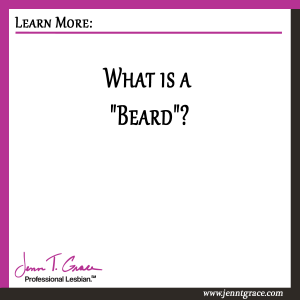 While LGBT rights have never been at a better point than they are now, many gay, lesbian, bisexuality and transgender people still suffer from discrimination, and the unfortunately widespread possibility of rejection from their families or loved ones should their sexuality or gender identity become known. Some people afraid of having their sexual orientation exposed use beards – friends or acquaintances who pose as their partner. The idea of beards may seem a bit old fashioned, but considering the very real difficulties LGBT people face with regards to their friends, coworkers, and families, they are often a very necessary thing.

What should I do if my friend wants me to be a beard?

Do you feel comfortable posing as this person’s significant other? Do you feel comfortable potentially lying to their friends or family? If the answer to either of these is no, don’t act as someone else’s beard, both for their sake and for your own. A beard should to be somebody the person who needs them fully trusts and respects, and the same goes for whoever you are bearding. Without these things, having an effective working relationship (even a fake one!) can be very difficult.

I suspect somebody I know is using a beard to conceal their orientation. What should I do?

Probably nothing! If somebody is uncomfortable disclosing their orientation to you, that is their prerogative and it is not your right to invade someone else’s privacy. The best thing you can do is let your friend know, in gentle and unassuming ways, that you would not judge or turn away from them and that you support and care of them no matter what. Should they decide to disclose their orientation to you, assuming there is anything to disclose, it should be on their own terms and ground.

Will beards ever become unnecessary?

Hopefully, some day in the future when sexual orientation is not simply assumed to be heterosexual. As of today, however, many people still can be discriminated, harassed, and ostracized from their jobs, families and communities on the basis of sexual orientation. The very existence of beards attests to a deeper, structural problem that must be sorted out and extirpated before true equality can take root.