What happens when you assume the gender of one’s spouse?

Home » Business » What happens when you assume the gender of one’s spouse? 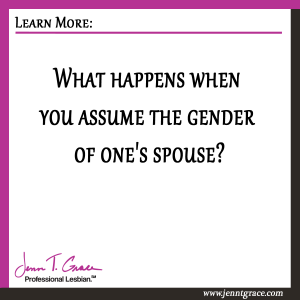 In the past, LGBT people were not at the forefront of society like we are today. It just wasn’t talked about. Now, LGBT rights and equality is something everyone is talking about. Democrats, Republicans and everyone in between is talking about it. Some in a positive way and others in a negative way.

While being a regular at a local coffee shop for a few weeks, I made friends with the barista’s and gotten to know them a bit. While I was there a man came in and was talking to one of the women behind the counter. He must have saw a wedding ring because without prompting he said “Well, what does your husband think about that?” To which she responded “My wife thinks…” The man clearly felt like an idiot. The light and hearty chatter that prompted him to ask the question quickly faded.

This awkward moment brought to you by making assumptions.

I’ve written quite a bit about the myriad of reasons why you shouldn’t make assumptions in business. The encounter I highlighted above happens often. Fortunately, the man who said this was by himself. Imagine if this had happened when he was with a prospective client? Even worse if that prospective client was LGBT and he didn’t know it. Inaccurate assumptions in this case would equal a lost sale.

Making assumptions on the gender of one’s spouse wasn’t something you had to think too much about in the past. But now, it is something you should be mindful of. If you want to do business with the LGBT community, these types of scenarios cannot happen to you. You have control over that by simply being educated on the issues.

Here are a variety of links to previous blog posts that highlight business etiquette and phrases you should avoid saying to avoid a scene like the above scenario.

Enjoy and let me know what you think! What expressions have you heard that would fall into the category of inappropriate words or phrases to avoid? Leave a comment below.

One Response to What happens when you assume the gender of one’s spouse?