Should you ever say "those people" when talking about the LGBT community?

Home » Can I really ask her that? » Should you ever say "those people" when talking about the LGBT community? 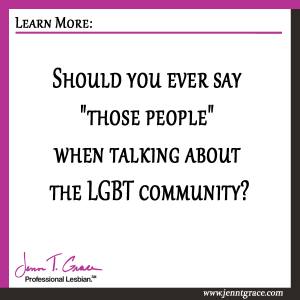 I’m a firm believer that the phrase “those people” should be banned from your vocabulary regardless of what group of people you are talking about. But since my blog is focused on the LGBT community we will talk about “those people” today. Did you see what I did there? All sarcasm aside the phrase “those people” regardless of who you are talking about is littered with negativity. It is often close-minded folks and bigots who use phrases like this. And if you are reading this and have said this previously, I’m sorry to be offending you, but you should really stop saying this.

The phrase “those people” comes with a lot of baggage. If you are talking about any group of people there are stereotypes and assumptions associated with the phrase. If I were to say “That figures – it’s totally something one of those people would say,” you likely have an image in your mind of who I am talking about. Even though I haven’t said anything about any particular group of people your mind is associating the phrase with something specific. Now apply that association to the LGBT community.

I was having a conversation with someone recently who was coming from a place of good intentions and he was trying to draw a comparison between the LGBT community being marginalized and ethnic groups. To make his point he stated “Each one of those people have their own cultural differences.” While he was trying to make a statement that was positive about how disenfranchised many groups of people are, his choice of the term “those people” landed like a lead balloon in a group of people. When we talk about “those people” and LGBT folks, I think of people who use the phrase “the gays” or talk about the “homosexual lifestyle.” These are all really bad phrases to use if you are trying to do business with the LGBT community.

Understand that by saying “those people” you are lumping an entire community of people together and are assigning them a stereotype. We know that assumptions and stereotypes are bad for anybody to perpetuate but even more so within the LGBT community. If you are trying to make a point try to find a better way to go about it. Saying “those people” to an LGT person when referring about LGBT people is going to get you in trouble and likely end with those around you losing respect for what you do, your product or your service.