The good, the bad, and the ugly of LGBT marketing. Part 6 of 6
by Jenn T. Grace LGBT, Marketing to the LGBT Community, You Might - Plan to Reach 2 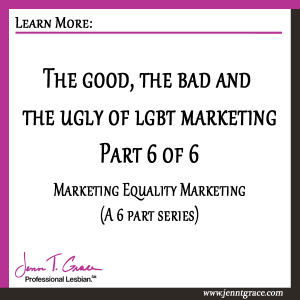 A big thank you to everyone who’s stuck around and read this series on marriage equality and LGBT marketing! For the final installment of the series, I let a previous intern, Patrick, run wild and take a look at what some companies are doing in regards to their LGBT marketing attempts. This post was first aimed at being a recap of some of the good, the bad and the ugly of LGBT marketing, but what I think this post actually does is highlight how ultra aware LGBT folks are in regards to what companies are and are not doing for the LGBT community more broadly.

He was tasked with the assignment of finding some of the not-so-great examples of LGBT marketing that have emerged in recent past. While my original vision for the post was to critique the visual aspects of some of the advertising and marketing coming out – he saw it differently. I am always educating business owners on being authentic and transparent. While he was looking for information for this post he came back with much more as it relates to the internal workings of companies and how transparency about the inside really has an impact on his views (and many LGBT folks) of them on the outside.

Below are his findings of the state of Marriage Equality mixed with LGBT advertising. His views are coming from the lens of an openly gay millennial, a market in itself that will be bursting in a short period of time. Take a look at how he sees the world –

Update: Before getting into Patrick’s findings, a fairly recent ad I would like to discuss is from Chobani. You can watch it here:

I dislike this ad for so many reasons. I’ve reached out and talked to many lesbians who also dislike this ad. This ad was done in very poor taste by either an external marketing agency or an internal marketing department, that clearly doesn’t understand how to properly market to lesbians.  From the overuse of sex – to the random man standing outside of the window playing a musical instrument, in a non-voyeuristic way, but still totally unnecessary – this ad does absolutely nothing for me personally, or the dozens of lesbians I’ve polled.  Please provide your thoughts in the comments below!

“For our final installment of the series, I decided to take a look around the web for some of the, well, not as sensitive and cognizant attempts some companies have made in marketing to the LGBT community, and what it is that made their efforts seem insensitive, contradictory, or outright offensive. And so, without further ado: let’s get to the bad, the sad, and the ugly of LGBT marketing. 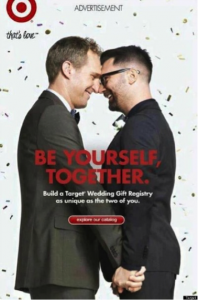 Target has long positioned itself as the more progressive alternative to Wal-Mart: more environmentally friendly, more inclusive and diverse, and with fairer labor practices than its infamous counterpart. But like many major corporations, Target has not always been forthcoming with their internal practices. Despite nominally supporting marriage equality, as this ad shows, it has also made financial contributions to politicians who have opposed LGBT rights, which did come with a public apology. All companies should take note, this sort of contradictory policy can make you look confused at best and downright hypocritical at worst. You cannot simply advertise to the LGBT community while corporate policies contradict social policies, you are more likely to be seen as dishonest and untrustworthy. 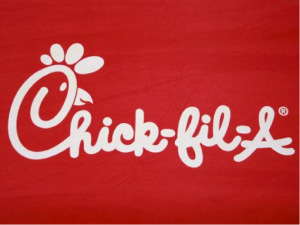 Poor Chick-fil-A. Years after CEO Dan Cathy told a TV reporter that “God’s judgement” is coming because of same-sex marriage, the company remains mired in the aftermath of scandal, a lightning rod of controversy and a company with the dubious distinction of attempted bans in Chicago and Boston alike. The issue at hand, as Chick-fil-A would like to think, is not “traditional values”; it is the reality that America in the past decade has changed to become a nation that is largely accepting and celebratory of its LGBT community, a fact that has left many social conservatives confused and fuming. As LGBT rights gain further traction, it will become necessary for people at all levels of business to recognize their own prejudices, no matter how big or small, and recognize that LGBT equality is not a matter of simple opinion but a statement on whether or not you believe certain people deserve basic rights and equality. This is something Chick-fil-A would do well to recognize; after all, when your company is literally banned from certain cities, its fairly clear you’re doing something wrong in the eyes of the public.”

Note from Jenn: My son and I take regular walks and one day we saw Chick-fil-A litter. We had to put a stop to it! Two terrible things – Chick-fil-A and litter!

Looking for the other parts of this series? Catch up on them here.

Marriage Equality is HERE: What does your marketing say about your company? (A special 6 part series)