The Business Case for Marriage Equality - Jenn T. Grace—Book Publisher, Speaker, and Author
by Jenn T. Grace Marketing to the LGBT Community, You Might - Marketing Tips 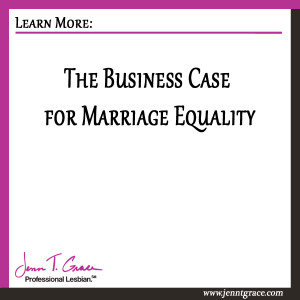 In 2015 Marriage Equality FINALLY became the law of the land, after more than four decades of fighting for the freedom to marry. The Freedom to Marry website contains great information on the history of this journey, how it happened and why it matters. I’ve included some language verbatim from them below from 2015 when we were in the midst of the fight for marriage equality-

Finally, the question of whether same-sex couples everywhere can marry will have its day before our nation’s highest court. In January, the Court granted review of cases from four states – Kentucky, Michigan, Ohio and Tennessee – with oral arguments likely be held in late April.

This historic moment follows years of steady momentum, from increasing public support, to four referendum victories in 2012, to even the Court itself, when it denied petitions in five marriage cases in October 2014, thereby allowing the freedom to marry to take effect in 11 states.

It’s time for a national resolution by the Supreme Court when nearly 72 percent of Americans live in a state that grants marriage to same-sex couples. There are now just 13 states without the freedom to marry, and those families continue to face harm every single day.

Almost 400 businesses, many major American companies, which include 40 of the Fortune 100 companies, signed an amicus brief in support of the business case for marriage equality. I am very proud to say that my company is one of those companies who signed on to the brief.

WASHINGTON, D.C.—April 7, 2015—Hartford, Conn., married couple Jenn Grace and Andrea Grace will be watching carefully as the Supreme Court justices take up the right of LGBT people to marry.

Jenn’s business is a marketing firm focused on LGBT diversity and is a certified LGBT business enterprise by the National Gay & Lesbian Chamber of Commerce. Jenn and Andrea were married in 2011 in a ceremony performed by Conn. Lt. Gov. Nancy Wyman.

“I started my firm a decade ago and contribute to the economy, including, of course, through partnerships and interactions with straight allies. My marriage should be recognized all the time, in every state of the union,” says Jenn Grace.

“NGLCC certifies businesses each week as being LGBT-owned; this helps these small businesses market themselves to our 140 corporate partners who want to increase the diversity in their supply chains,” says Justin Nelson, president, NGLCC. “Why would the Supreme Court want to take a giant step backward in these efforts?”

NGLCC’s concerns about the case were presented in an amicus brief it and nearly 400 corporations and business organizations filed with the court.

The brief argued that the court should legalize marriage equality. It stated: “Employees with partners of the same sex should be permitted to marry if they so choose, and then should be treated identically to their married heterosexual counterparts. State laws that require otherwise impose a significant burden on us and harm our ability to attract and retain the best employees. Such laws force businesses to uphold discriminatory laws that run counter to important corporate values. In the end, economic growth suffers.”

The National Gay & Lesbian Chamber of Commerce is the business voice of the LGBT community and is the largest global not-for-profit advocacy organization specifically dedicated to expanding economic opportunities and advancements for LGBT people. NGLCC is the exclusive certification body for LGBT-owned businesses. www.nglcc.org