Marketing to Lesbians – where are they?

Home » Business » Marketing to Lesbians – where are they? 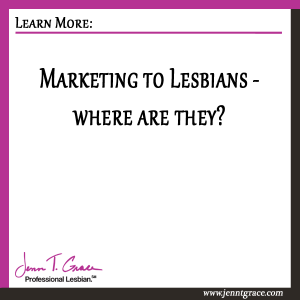 Previously I wrote a rambling blog post titled, Deconstructing gaydar: Why do I know she’s a lesbian? I am really happy with the readership and comments spawned from this post. My intention was to create a dialogue around the mystique of gaydar but also point out that it does exist as well as ask questions about how it works. If you didn’t get a chance to read it click on the link above and let me know what you think.

I concluded that blog post with asking the question “Where are the lesbians?” This is a really common question I get and something I don’t have a strong concrete answer too. Let’s first talk about a myth about the LGBT community – the LGBT community is a monolith sharing the same views, ideas, political affiliations, etc. Wrong. The LGBT community consists of lesbians, gay men, bisexual people and transgender folks. Each of these letters stands for a very different group of people who have at least one commonality – their sexual orientation or gender identity lumps them into the umbrella of LGBT. Just because I am a lesbian does not mean I have a single thing in common with another lesbian other than the fact that I am married to a woman and am a woman. This mindset of thinking all LGBT people think, act, shop, and behave the same is where many companies looking to market to the LGBT community go wrong.

So back to the question at hand – Where are the lesbians? I’ve been asking everyone I know. It appears that lesbians are somehow mythical creatures that don’t exist or don’t do everyday ‘normal’ things. For example, someone asked me “Do lesbians go to the beach?” Why the hell wouldn’t lesbians be at the 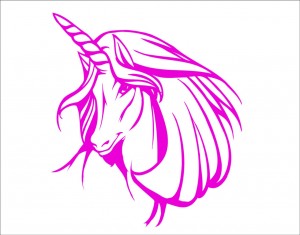 beach? Are we vampires secluded to the confines of darkness? No. So why on earth would someone question whether or not you’d see lesbians at the beach? This is what baffles me. While I know that lesbians can be found doing any type of activity, shopping at any place, dining at any restaurant, living in any city or town in the world – for someone looking to market to lesbians, it’s not as simple as looking for where the lesbians hang out. Why? Because they are everywhere. (And to be fair gay men are too – a topic for a different day.)

I had a really interesting conversation with a fellow LGBT business owner who is in Sacramento, California. She and I were brainstorming on where the lesbians are. From that conversation we deduced that lesbians can be much more difficult to find because of our nature as women. Look at it this way – two women can go anywhere together; stay in the same hotel room, eat dinner together, go to the movies, etc. – without anyone really thinking about it. Those women can be sisters, best friends, cousins, etc. Now let’s think about the nature of men. How often do two men share the same hotel room? (I’m not saying it doesn’t happen – but my guess is it is far less common or accepted than women.) Or how often do you see two men at the movies? Movies that are not Star Wars or Lord of the Rings (No offense to the nerd men out there – I’m just as dorky as the rest of you, I swear!) Or when do you see two men having a nice dinner together at an Italian Restaurant? Again, I’m not suggesting that straight men don’t do these things, however it is far more common to see two women doing this or gay men.

In summation of my above ramblings – what I am getting at is that men and women are very different by nature and should be treated as such in a companies marketing efforts. You wouldn’t see Dove for Men marketed the same way to men as it is to women, right? So why should marketing materials to gay men be the same to lesbians or vice versa? Next week I hope to continue this search for lesbians with insights from additional conversations I’ve had in my quest to answer “Where are the lesbians?” Come back next Tuesday and don’t forget to leave a comment below or on any of my social media outlets. I truly love engaging in great conversation with you!