Queer: What does it mean?
by Jenn T. Grace Communications, LGBT, Marketing to the LGBT Community, You Might - Etiquette 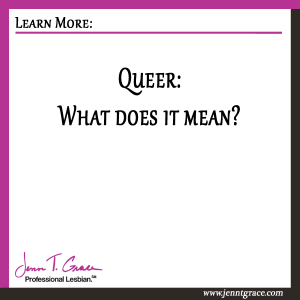 If you’ve been paying even a bit of attention to current LGBT politics, you may have seen the word “queer” thrown around more than once. And if you’re someone from my generation, IE born at any point before the ‘90s, you might find yourself a bit confused by this. After all, isn’t queer a bad word? Isn’t that what bigots and homophobes and transphobes call LGBT people? The answer is yes and no. Queer, like the word gay, has been going through a reclamation of sorts, beginning during the 90s with the formation of “queer theory” and queer studies in the academy and continuing onwards as a new generation of LGBT begin describing themselves with the term. However, there is nowhere near consensus regarding the implications and meaning of the word, and this is something that must be remembered when approaching any LGBT or queer discourse.

One of the difficulties in navigating an LGBT space is figuring out and navigating through complex and often rapidly changing terminology. On its own, queer usually denotes “gender and sexual minorities”, but it is also an integral part of a new vocabulary of LGBT terms that have begun being used by a younger generation of LGBT theorists and activists, and which have been met with contentious debate throughout the community. Other terms that may not be familiar to the lay reader, for example, include GSM (gender and sexual minorities, a potential more inclusive acronym than LGBT), cisgender (a term for people who identify with the gender they were assigned at birth) binary and non-binary (referring to people who do or do not identify as strictly male or female, IE part of the gender binary), heteronormative (broadly referring to the current culture in which heterosexuality is assumed to be the norm, and all other sexual orientations deviations) and countless other terms that have only recently escaped the academy and been brought into popular discussion.  And even these terms, though they are far from stable and accepted, continue to evolve and be contentiously debated between various parts of the LGBT community. Taken far enough, the debate can reach purely theoretical levels which question whether an LGBT community exists at all, and whether gender and sexual labels are terminal and arbitrary, but we needn’t go that far down the rabbit hole in discussing how to go about LGBT terms. If you ever find yourself confused and unsure of what’s ok and not ok for you to say (and don’t worry! All of us do!) , here are some tips:

Don’t assume somebody wants to be called queer

Like any term, “Queer” carries with it ideological and generational significance, and for many people, the term remains a pejorative. Nor should queer be used as a stand-in for LGBT, which if not perfect remains the most functional acronym for our community. Pay attention to the community you’re in and your own role within it (Are you straight? Cisgender?) before you assume it’s alright to use terms that could still carry a lot of sting.

If you aren’t sure of a word’s meaning, don’t use it

Even within the LGBT community, people aren’t always on the same page with regards to the newest jargon and labels. Even if you think you know what a term means contextually, don’t try to make it a part of your own speech unless you’re certain it’s something that will be commonly accepted in LGBT spaces. This can be especially tricky with regard to the racial, generational, and gender characteristics of where you are, but that’s perfectly fine, because:

Don’t be afraid to ASK!

If you’re not sure about the meaning or appropriateness of a word, feel free to ask the people around you what it means and whether they’re comfortable with you! Although not everyone has the energy to answer extremely complex questions on queer theory, the vast majority of people are more than happy to answer respectful and cognizant questions. There’s no reason for you to feel afraid to ask respectful, non-invasive questions (invasive questions, for example, include pressuring someone to reveal their sexual orientation or gender identity when they do not feel comfortable doing so, or pressing them as to “why” they identify that way). After all, we’re all still learning and the best way to learn is through each other!

If you liked this post, check out these related posts: