How to Identify and Respond to "The Pronoun Game"
by Jenn T. Grace Business, Can I really ask her that?, Coming Out in the Workplace, Community, Day-to-Day-Life, LGBT, LGBT Questions from a Friend..., You Might - Etiquette 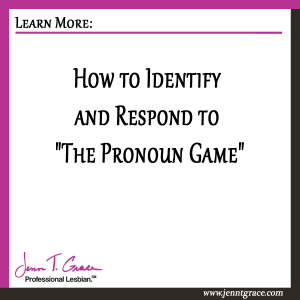 I’ve made a couple of references to this in past blog posts but I had a recent conversation with someone where I could tell she was playing the pronoun game with me. I was able to spot it and respond accordingly. When I consciously realized it was the pronoun game in action I thought this would be a great topic to address in this blog.

The Wikipedia definition above does an okay job at providing the basics of what the pronoun game is (even though I don’t agree with the exclusion of transgender people from it.) But regardless you now have an idea of what I’m talking about. I’ve certainly been guilty of playing this game in the past. I recently shared a coming out in the workplace story of my own and referenced it. If you are interested you can read that blog post here.

Let me give you a scenario to visualize. You are at a networking event. You encounter someone you’ve met a dozen times before but you would still consider her an acquaintance. You begin telling her about this great trip you recently took to Iceland.  She says that going to Iceland is something she’d love to do. You notice she’s wearing a ring and say ‘Well, why don’t you convince your husband to take you. I bet he would love it too.’ Now this is where things can go south.

Make note of the personal nature of the questions you are asking someone. Basic business etiquette would advise you to err on the side of caution. Think it through before you ask. I wrote a blog post titled “In a business setting: is it okay to ask intimate details?” This post was prompted by someone asking me ‘who gave birth’ in a recent business meeting. And it wasn’t someone I knew overly well. If you want to know how I responded, check out the post. So rule #1 – think before you speak and follow common business etiquette.

Don’t assume the person you are talking to is married to the opposite sex. This can get you in trouble a good amount of the time. Make it a regular part of your conversation to say broader terms like spouse or partner. I’m a big fan of using the word spouse. Spouse is a common enough term that doesn’t really have any specific connotations associated with it. If they are comfortable with me they will out themselves and share details about their same sex husband/wife/partner. If they are not comfortable with me, by me saying spouse it allows them to keep control of the conversation and engage in the pronoun game. Someone engaging in the pronoun game would answer with “Yes, my spouse is wonderful and we would love to go to Iceland.” The sentence above does not identify the gender of the spouse but it does not out them either. It also doesn’t immediately put this person on the defense because you’ve wrongly assumed they are married to the opposite sex.

Responding to the Pronoun Game

If you are reading this and you are the one playing the pronoun game with other people… For a quick encounter with someone the above outlined scenario is doable. You don’t need to out yourself in every situation. I, of course, prefer to be as visible as possible to help raise awareness about LGBT issues. But I understand the average person shouldn’t be obligated to do this. If you are in a conversation with someone you won’t see again or have no interest in doing business with, then a simple response is all it takes then move on.

For someone you are closer with the pronoun game can become very difficult. I could start a sentence that says “I started seeing someone. We met at last month’s networking event in New York City.” It’s a short sentence and doesn’t grammatically sound odd. But what happens when the person you told that to is asking for more details or makes the dreaded opposite sex 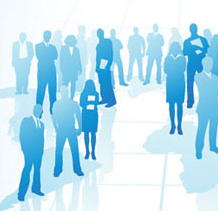 assumption? “That’s great Jenn, he sounds awesome, what type of job does he have?” Sometimes you’ll be talking about someone with a unisex name so you could use their name and say “Jamie is an English teacher. Jamie is from Connecticut. Jamie makes the best dinners.” This choppy broken English starts to sound like you are doing a workbook made for a 3rd grader. And it sends up red flags to those hearing you talk like this.

On the flip side – If you spot someone doing this in conversation respect their boundaries and understand where they are coming from. It may be that they are not out to anyone, may not be out to their family, may not be out in their professional life, etc. We can’t know everyone’s unique circumstance but we should be respectful of them. I am an advocate for being out and being proud of who you are, being your authentic and transparent self. But I also know that I cannot ask this of everyone because everyone has a different circumstance. I feel incredibly fortunate enough to be in a position where I am out publicly and advocate publicly on behalf of the community – I hope in some small way I am helping pave the way for those behind me.

Join the conversation on Facebook with over 700 fellow fans!