The power of social media for social justice

Home » Business » The power of social media for social justice 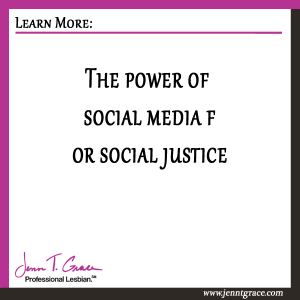 I want to talk a bit about the power of social media for getting your message out, whether it is intentional or unintentional. Social media can be a very powerful business tool if harnessed correctly. If used incorrectly it can be incredibly damaging to your business.  I want to share two very different examples of how the power of social media has played out. The first I will address is an LGBT equality issue that happened in Florida. The second I will talk about is one of the most epic social media mistakes a company has ever made on Facebook.

The power of social media for social justice

A story rocked the social media sphere about LGBT equality for a Florida teen (read the story here.) In short two teenage girls ages 15 and 17 were dating. The parents of the 15 year old were against the same-sex relationship. The parents of the 17 year old (Kate) have accepted her for who she is. Within the short window of Kate turning 18 and her girlfriend remaining 16 she was being prosecuted for 2 felony counts of “lewd and lascivious battery on a child 12–16 years of age.” Kate has already been kicked out of her school, kicked off of her high school sports teams, and is now dangerously close to having a criminal record.

When reading the articles and hearing this story it is clear that the teenager has violated Florida law, just like any other same sex or opposite couple would when one of them turns 18. The problem with this story is that the parents pressing the charges knew when to strike to catch the girls on the age issue specifically because they don’t like their daughter being in a relationship with another girl. I am not arguing that she didn’t break the law because she did. But what I can argue is that the reasons for the charges being pressed are filled with hatred and bigotry. Kate’s parents have blown up the social media sphere with the campaign “Stop the Hate, Free Kate.” At the time, #freekate was trending on Twitter. Most were in support of Kate and her family, but there were also plenty of very hate filled comments, which I hope the girls didn’t listen to or believe.

This is an incredibly powerful example of the power of social media. This story spread throughout the world in an effort to not allow this to happen to Kate or any other LGBT teen. We live in a hateful society in many places in the U.S. and abroad. If a homophobic parent sees this happening it could set off cases nationwide where LGBT teens are facing the same types of charges because of parents disapproval. I bet while reading this you have either been in a relationship where there was an age difference like this or know someone who has. It is very common and yes, it is breaking the law, should someone want to press charges. It’s a very murky area and I’m not here to get into the legal or political aspects of it. I’m here to talk about the power of social media to get your message out there. They took this story to the people via social media and it has spawned interest nationwide. Social issues have a tendency to do this because it is social media after all.

What not to do when the haters come knocking

Social media can go viral whether intentional or not. You have to know how to harness it appropriately. At dinner the other night I was with some friends and colleagues and we were talking about social media and how occasionally you can get slammed for misquoting someone, taking something out of context, etc. But you have to go with it and not delete the messages as much as you would like to. It can be embarrassing for you or your company.

Like anything on the internet people have free reign to talk badly about a company should they chose to. If someone comes to your company Facebook page and tells you how horrible your product or service is – you need to hear them out and respond, not cave to the knee jerk reaction of deleting the message. Your other customers need to see how you handle these types of situations. Occasionally you will have the completely irrational crazy who won’t hear anything you have to say in response to their issue, and honestly that’s okay. You have to leave their post up there and respond to the best of your abilities so your other customers see your approach. This will gain far more trust than simply deleting the negative comments on any of your social media outlets. I had this happen when I was first starting my business Facebook page. Someone misread what I wrote and went off the handle. They slammed me on Facebook and they slammed me on Twitter. At the end of the day I knew I was right and responded accordingly. My fans and followers knew that the barrage of 40 hateful messages in a matter of minutes was something wrong with the other person, not me. Rational people don’t handle themselves like that. Leaving the messages up is a chance you have to take but you need to remember these are your customers, potential customers, fans and followers. They deserve t be treated with respect and have their voices heard, even if it is in a public forum and even if they may not seem so rational.

A really bad example of this happened when a company who went on the show Kitchen Nightmares went a bit postal on their Facebook page after the episode aired. People were writing bad things about them on their Facebook wall and rather than listening and hearing the people out or ignoring the really hurtful and hateful comments they fired back. It was an epic failure on their part and quite honestly one of the best examples of what not to do on your social media outlet. Read the whole story and timeline here. This article shows how the whole thing played out over the course of a few hours. This is a must read account of the events.

The power of social media is stronger than many people and business owners realize. You really must have a strategy and plan in place for what you are going to do or not do in times of perceived crisis.  Whether you have a compelling social justice story that you want the world to latch on to or you are getting slammed on your Facebook page – you must have a plan for how you are going to execute on the appropriate strategies or fix the pending troubles. Do you have a plan in place?