Pinkwashing: What does it mean?
by Jenn T. Grace LGBT, Marketing to the LGBT Community, You Might - Marketing Tips 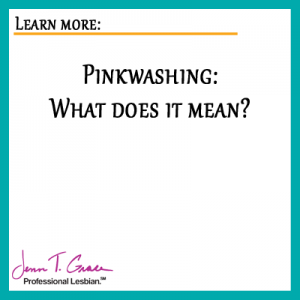 One thing that must be understood is that, on the whole, the LGBT community is far more cognizant of various social and political issues than the average population. This is on account not of any inherent intellectualism or erudition, but is rather the result of their own position; simply by being openly who they are, in the eyes of society, LGBT people are in- themselves social and political statements. The majority of LGBT people are people who are often disempowered in other ways, whether by sex, race or class, and to many it is critical to understand the ways in which these various oppressions intersect and comingle. Therefore, when a group, a company, or a government attempt to appeal to the LGBT community, despite having committed other wrongs in other fields, it is often seen as an attempt to use the LGBT community to wash away previous wrongdoings. This phenomenon, by and large introduced to the public by a New York Times article on Israel’s use of it, is called Pinkwashing.  For while there is nothing wrong with appealing to the LGBT community or emphasizing inclusivity in business (quite the opposite, in fact!) using LGBT-specific issues to downplay otherwise negative aspects of one’s business is never a winning strategy.

Let’s look back at the example in the article provided above. Brand Israel, the government sponsored brand attempting to reach out to international tourists and audiences, uses LGBT rights as an indicator of modernity, as a reason that they should be supported and valued over their “homophobic” neighboring countries. This is a political strategy that has also been replicated by the far-right in Europe and elsewhere, who position immigrants from other countries as being inherently homophobic and inimical to LGBT rights. Besides being racist, these sweeping generalizations ignore the fact that the LGBT community does not only exist in so called “enlightened” places, but exists in all countries, within all communities. To insist that Muslim immigrants and countries are all homophobic, for example, is a blanket statement that simultaneously paints the entire faith with a single brush and erases the existence of countless LGBT Muslims throughout the world.

Some of these issues may seem someone distant to those of us in America, who are as affected by the political and economic currents previously described. But pinkwashing is still a significant reality, especially among businesses who tend to view the LGBT community as a bunch of walking dollar bills.

Defining what is and what isn’t pinkwashing can be difficult. On one hand, it’s no good for companies to use LGBT issues as a smokescreen for other realities, but on the other, emphasizing inclusivity and equality is never a bad thing! But when the LGBT community becomes a shield, so to speak, for a company to continue engaging in more nefarious practices, pinkwashing occurs.

How can a company avoid Pinkwashing?

At the core of the pinkwashing phenomenon is something all LGBT-friendly companies must recognize: dishonesty. When people feel as if they, their lives and the issues important to them, are being exploited as a quick means to get a buck, they’ll feel used, unvalued, expendable. This is especially salient when the LGBT community is not only exploited, but used as a means of smokescreening other important issues. To avoid being accused of pinkwashing, just use a simple strategy; don’t pinkwash. Pursue equality, transparency, and accountability in your business practices, and remember that injustices done to any group or community aren’t something the LGBT community is like to soon forget. Support for the LGBT community is not conditional, and nobody is obligated to patronize a business that doesn’t seem or feel trustworthy. Openness and fairness are the easiest ways to ensure a better business solution for all!