The Damaging Effects of Negative Stereotypes
by Jenn T. Grace Business, LGBT, Marketing to the LGBT Community, You Might - Etiquette, You Might - Marketing Tips 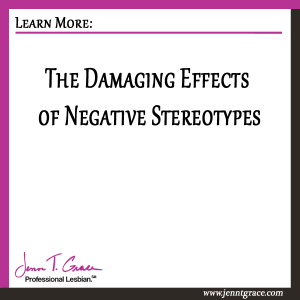 You may or may not recall a few year ago there was an article titled “Feds Spend $1.5 Million to Study Why Lesbians Are Fat.” It stated “The National Institutes of Health (NIH) has awarded $1.5 million to study biological and social factors for why “three-quarters” of lesbians are obese and why gay males are not, calling it an issue of “high public-health significance.” Brigham and Women’s Hospital in Boston, Mass., received two grants administered by NIH’s Eunice Kennedy Shriver National Institute of Child Health and Human Development (NICHD) to study the relationship between sexual orientation and obesity.”

From a business and marketing perspective I have some issues:

The actual study is called “Sexual Orientation and Obesity: Test of a Gendered Biopyschoscial model.” The study is not called let’s find out why “lesbians are fat.” Thank you Elizabeth Harrington for taking creative liberties on the studies true title. And shame on the media who latches on to things like this for the sake of publicity.

Where are the numbers of ‘three-quarters of lesbians are obese’ coming from? I’ve done some digging, trying to find the data pool in which they derived this information and have come up empty handed. I personally think it would be interesting to learn about the disparities between sexual orientation and obesity, if they exist. I think it would be interesting for any group to understand this data, but that’s just the dork in me coming out. If you are reading this and know the data, please e-mail me – blog@jenntgrace.com.

I am not a numbers person at all but just thinking here – what I am wondering is how were these so-called ‘fat lesbians’ surveyed? It must have only surveyed lesbians who self identified somewhere, so it doesn’t take in to account the many lesbians who are not out. Studies suggest that 3.5% of Adults in the US self identify as being LGBT. Of that 1.7% identify as gay or lesbian. There is a great study by The Williams Institute at UCLA School of Law School that outlines in detail the difficulties in measuring the LGBT population. You can download the PDF here.

The headline of this article is damaging. The fact that I cannot uncover where the 75% number comes from is frustrating but my issue is more with the stereotyping nature of the article title. Not only is this article saying ‘hey, everyone did you realize all lesbians are fat?’ but it is also backing up this claim with data that is not easily accessible. Most people will see the headline, read the article and just go with the fact that if the NIH is investing $1.5 million dollars in this then by golly all lesbians are fat. This just continues to perpetuate stereotypes which so many of us (myself included) are trying to avoid.

If we look back at the history of LGBT people in advertising it hasn’t been a pretty road. Every possible stereotype has been played out and has damaged the image of the community. There are common themes that have occurred for years that hit up every member of the LGBT community. Some examples;

For those of you out there who are looking to market yourself or your business to the LGBT community – stay away from stereotypes. Be inclusive. Don’t use ‘hot straight women’ to play lesbians or stereotype by using ‘flannel wearing fat lesbians’ in your marketing materials. Just be real. Once upon a time a company may have thought this was a good way to win over the LGBT crowd, but it’s not. The community is very diverse and shouldn’t be marginalized to specific defined stereotypes. It is mainstream articles like the one noted above that continue to spread negative messages about the LGBT community. Let’s collectively stop it.