Marriage Equality is Coming: Get your marketing plan ready! 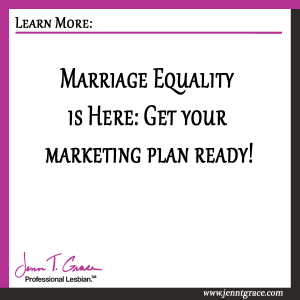 Years ago the hot topic of the moment was the Supreme Court hearing oral arguments in the Proposition 8 case which challenged California’s ban on same-sex marriage and the federal Defense of Marriage Act (DOMA) case. I was personally hooked on MSNBC specifically watching Rachel Maddow. There was plenty of talk around moral issues and social issues as it related to whether or not these laws are unconstitutional. But what I hadn’t heard a whole lot about is the bottom line business impact that same-sex marriages and weddings provide to small business owners.

It’s been well noted that many major corporations support marriage equality. Often the reason they are for marriage equality is because point blank it’s bad for business. Period. Studies show that happier employees make more productive employees. LGBT employees are happier when they are able to be out at work and are able to bring their whole selves to work. I have a few past blog posts that talk about this in more details. You can check them out here – Coming Out in Business: What we can learn from Jodie Foster and Internally Communicating LGBT Marketing Strategies to your Employees. Also, my podcast interview with Jennifer Brown goes into this in detail as well. Listen to that episode here. Additionally, on the administrative end – processing straight marriages and same sex marriages differently within a company’s system can be burdensome and costly.

I have some amazing readers of this blog and am fortunately sent links and articles on a regular basis. One great article that came my way was “Las Vegas wedding businesses: We’d love to see gay marriage legalized.” (Thanks Linda!) In my opinion this is where same-sex marriage had had a major impact. This blog and my podcast really focus on educating business owners on how to market themselves to the LGBT community.

The above referenced article focuses on the predicted business impact Las Vegas, Nevada would see once marriage was legalized in the state. The Williams Institute for Sexual Orientation Law and Public Policy at UCLA estimated that same-sex marriage in Las Vegas would generate $23 – $52 million in business revenue. Those are some large numbers.

The article notes, that 85% of wedding ceremonies in Las Vegas come from couples outside of Southern Nevada. Las Vegas is a tourist destination and clearly has a large market for weddings based on the percentage noted above. It’s obvious where an additional $23 – $52 million in business revenue would come from. Let’s think of where that additional business revenue goes to – to small businesses and those in the wedding industry; photographers, caterers, florist, transportation, lodging, officiants, among many, many other types of businesses.

Get your marketing plan ready!

Once all states recognized same-sex marriage it opened up a world of opportunity. You should have created a marketing plan specifically around reaching out to the LGBT community for their wedding needs. Here in Connecticut I know a handful of photographers who have been reaping the benefits since same-sex marriage became legal in 2008. One business in particular has photographed hundreds of same-sex couples who have traveled from outside of the state to get married here. That’s a substantial impact for the economy of Connecticut and that photographer in particular. But the travel agents, florists, caterers, officiants, etc. have all gained from this as well.

New York State legalized same-sex marriage in 2011. In that first year the New York City tourism and marketing bureau reported that the city saw a $259 million impact from marriage licenses and wedding celebrations. It’s important to have a marketing plan so you too can reap the benefits. Do you need advice in taking those first steps to creating an amazing marketing plan? If yes, check out my 6 part series to get you headed in the right direction – Maximizing Your LGBT Outreach with a Solid Plan

Marriage Equality is HERE: What does your marketing say about your company? (A special 6 part series)

2 Responses to Marriage Equality is Coming: Get your marketing plan ready!