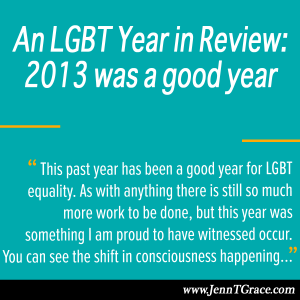 This past year has been a good year for LGBT equality. As with anything there is still so much more work to be done, but this year was something I am proud to have witnessed occur. You can see the shift in consciousness happening, in the United States. However, there is more work to be done abroad in places like Russia, who now ban essentially anything to do with LGBT people. There are many other countries who have similar issues including many where being gay is point blank illegal and you will be charged or killed because of it. I could go on about all of the things that are not going well for LGBT folks but today to end 2013, I want to highlight just a few things I noticed go well for the community this past year!

The year started off with an incredibly moving bang from President Obama. He made history while delivering his second inauguration speech when he mentioned both the Stonewall uprising and gay and lesbian people being treated “like anyone else under the law.”

“We, the people, declare today that the most evident of truths — that all of us are created equal — is the star that guides us still; just as it guided our forebears through Seneca Falls, and Selma, and Stonewall…” he said.

He went on to say: “It is now our generation’s task to carry on what those pioneers began. For our journey is not complete until our wives, our mothers, and daughters can earn a living equal to their efforts. Our journey is not complete until our gay brothers and sisters are treated like anyone else under the law — for if we are truly created equal, then surely the love we commit to one another must be equal as well.”

Having a President who puts LGBT equality on the line for all to hear, still gives me goosebumps!

On June 26, 2013 (happy birthday to me), the Supreme Court of the United States ruled that same sex marriages must be recognized by the federal government for the first time. In the same day, it also made same sex marriage legal again in California, a long awaited day for those living in the state.

The Employment Non-Discrimination Act (ENDA), which bans workplace discrimination against lesbian and gay employees made it through the Senate but is stuck in the Republican-controlled House. One of the highlights for me this year were the frequent trips I made to Washington D.C., in support of passing ENDA. We aren’t there yet but it’s not a complete loss, we must keep pushing in 2014.

We are now up to 17 states who have Marriage Equality. This year California, New Jersey, Delaware, Hawaii, Illinois, Minnesota, Rhode Island and Maryland and New Mexico all came on board the Marriage Equality train! So very exciting. In just one year we went from 8 states to 17 states who recognize same sex marriage. Now that is progress my friends.

In 2013, many public figures and celebrities ‘came out’ of the closet.

All in all I think it was a successful year for LGBT equality and with the current momentum it is really exciting to see what can and will happen in 2014! Yahoo! News put together a 2013 Year in Review called “2013: A Landmark Year for Gay Rights.” It’s short and captures the spirit of the year well. Check it out here.

I want you to make 2014 a landmark year for your business. Join me on the next webinar to learn how you can tap into the $890 billion dollar LGBT market.