The hidden implications of LGBT terms and why you may want to avoid them
by Jenn T. Grace Allies, Business, Communications, LGBT, Marketing to the LGBT Community, You Might - Plan to Reach 4 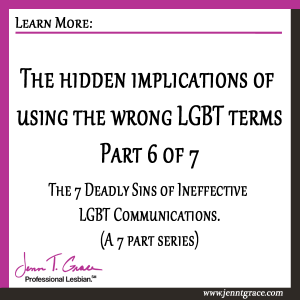 Here we are on part 6 of the “The 7 Deadly Sins of Ineffective LGBT Communications.” We are almost to the end of this series. I hope you’ve enjoyed it up until this point. The whole series came up because I believe 98% of miscommunication blunders occur for one of 7 avoidable reasons. The 7 deadly sins we’ve already covered are 1. Assumptions 2. Stereotypes, 3. Inappropriate Questions, 4. Mannerisms and 5. Insinuations. In this post we are going to talk about 6. Implications and in the next post we close out with 7. Assertions.

Each of these posts has started off with a definition. So let’s define Deadly Sin #6: Implications. Merriam-Webster defines an Implication as –

Implying can be dangerous in business settings in general, let alone when we are talking about the nuances within the LGBT community. To effectively communicate to LGBT customers and create the proper marketing strategy to reach them, you must be mindful of many things. Being mindful of why implying something, whether inadvertently or otherwise, is a bad thing, will be sure to help your efforts. 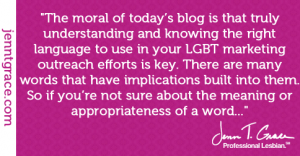 Since we are into part 6 of this series many of my common examples have been used in other ways. For example, using the phrase ‘but you don’t look gay’ is riddled with Assumptions, Stereotypes, Insinuations and yes, now implications too! But since I’ve brought that one up several times now I am going to go a layer deeper into implications and share a few lesser known ways implying is bad for business and how you can turn it around for the betterment of your LGBT marketing efforts.

One of the difficulties in navigating the LGBT space is figuring out and navigating through complex and often rapidly changing terminology. Here are 3 terms and their implications –

Queer, like the word gay, has been going through a reclamation of sorts, beginning during the 90s with the formation of “queer theory” and queer studies in the academy and continuing onwards as a new generation of LGBT describing themselves with the term. However, there is nowhere near consensus regarding the implications and meaning of the word, and this is something that must be remembered when approaching any LGBT or queer discourse. On its own, queer can denote “gender and sexual minorities”, but it is also an integral part of a new vocabulary of LGBT terms that have begun being used by a younger generation of LGBT theorists and activists, and which have been met with contentious debate throughout the community. Taken far enough, the debate can reach purely theoretical levels which question whether an LGBT community exists at all, and whether gender and sexual labels are terminal and arbitrary, but that is a blog post for another day.

So gender identity can be complicated for some to grasp. I define it as an internalized sense of one’s self. To better understand, imagine this –

Take a moment and imagine being born a girl and everyone around you, your parents, your siblings, your teachers, and your family – all oohing and aahing over what a pretty little girl you are. Buying you pink everything and dolls and ponies, etc. But really you know that you are a boy. Even at the earliest age you know inside that you are a boy but everyone around you is telling you that you are a girl. That is what it is like to be transgender. There are many stories from across the globe of children coming out as transgender at very early ages, as early as 4 or 5. Fortunately nowadays there are resources available for children and parents who are going through this to help make the transition easier. To hear a very personal story of coming out as trans, click here to listen to my podcast interview with Tony Ferraiolo.

I’m going to give you a really personal example of gender expression. Many years ago I dated a twin. Outward by her appearance she very much fit the stereotypical image of what you’d expect a lesbian to look like, you could even call her a ‘soft butch’ – which, yes, is an actual term, not something I am making up. (A blog post for another day.) Now, while her outward appearance was a bit on the masculine side, she herself was very feminine. While she may have appeared something different to the outside world,  she was very rooted in gender identity as a woman, even though her gender expression was implying something else.

During a meeting a while back I was reviewing candidates for a specific position and a few of us noticed that ‘cisgender’ was an option on the application form. I personally knew one of the applicants and hadn’t heard the term cisgender before so I was immediately thinking… I’ve never heard her describe herself as that. The person across the table from me said “So, what does cisgender mean?” and I blushingly had to admit I wasn’t 100% sure.

Don’t be afraid to ASK!

The moral of today’s blog is that truly understanding and knowing the right language to use in your LGBT marketing outreach efforts is key. There are many words that have implications built into them. So if you’re not sure about the meaning or appropriateness of a word, feel free to ask the people around you. I’m happy to help you along the way, of course! After all, we’re all still learning and the best way to learn is through each other!