What do the Great Depression and LGBT equality have in common?

Home » LGBT » What do the Great Depression and LGBT equality have in common? 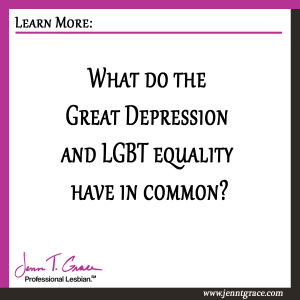 In many past blog posts the concept of generational differences within the LGBT community have come up. I’ve never delved deeper into it for a lack of a good way to compare and contrast the generations. In a post I wrote about the term Queer, the generational difference came up. If you talk with younger LGBT folks (30 and under), they often use the word queer a term of empowerment. It is something that they embrace. In conversations with older folks of the LGBT community (60 and up) the word queer was something that was used against them in a derogatory way. I talk about the nuances within the LGBT community and this is a really good example. Using a term like queer as part of your blanket marketing efforts may or may not work depending on who your target market is.

I bring this all up because in a recent conversation with some Canadian colleagues I exclaimed – “Why don’t LGBT youth understand what the older LGBT generation went through?” I’m sure my exclaiming that made me sound like I was in my 60’s or 70’s and reflecting back on when a loaf of bread cost a nickel. I am in a sandwiched generation. As someone in my early 30’s, I respect and honor the LGBT folks who have come before me and their work for the equality I now have because I’m not too far removed from it. Perhaps some of this has to do with the evolution of the Internet and social media. When I was coming out in 1999-2001 time frame we had MySpace which was no where near as powerful as Facebook is today. During that time I was much more aware of what older generations of LGBT folks had gone through. I would encourage you to watch the movie “If these walls could talk…” There is an older lesbian couple, whose story will make you cry. Their story is what is engrained in my brain and why I feel it to be necessary to continue to honor and respect the pioneers of the LGBT rights movement. The younger generation has seemingly lost its connection to what it was like pre-Facebook and pre-Marriage Equality. It’s hard to blame them because they’ve never lived in a time where this wasn’t the case.

It is the job and duty of LGBT folks across the world to preserve the history of what being gay/LGBT once meant. I hope my blog in some small way is capturing this.

What are your thoughts?

2 Responses to What do the Great Depression and LGBT equality have in common?