What’s the difference between gender identity and gender expression

Comparing gender identity and gender expression is like… Comparing Granny Smith apples to Macintosh apples. They’re both fruits and part of the same family. In a previous post I talked about the differences between sexual orientation and gender identity. I made the comparison that they were like lemons and grapes. They’re both fruit but they have little to do with one another. (You can read that post here)

As I talked about previously gender identity is an internalized sense of one’s self. I used the example below to highlight what it must feel like to be a transgender person.

Take a moment and imagine being born a girl and everyone around you, your parents, your siblings, your teachers, and your family – all ooing and aahing over what a pretty little girl you are. Buying you pink everything and dolls and ponies, etc. But really you know that you are a boy. Even at the earliest age you know inside that you are a boy but everyone around you is telling you that you are a girl. That is what it is like to be transgender. There are many stories from across the globe of children coming out as transgender at very early ages, as early as 4 or 5. Fortunately nowadays there are resources available for children and parents who are going through this to help make the transition easier. To hear a very personal story of coming out as trans, click here to listen to my podcast interview with Tony Ferraiolo.

So that’s a high level view of transgender, which is gender identity. Gender expression is what it sounds like. It is the way you express your gender. This too doesn’t necessarily have to correlate with sexual orientation. Gender expression is the way you express your gender to society which can be include the way you dress, the way you behave, mannerisms and appearance. The best way to describe everything is with a visual. Meet the Genderbread person. At a quick glance this will show you how everything relates to one another. 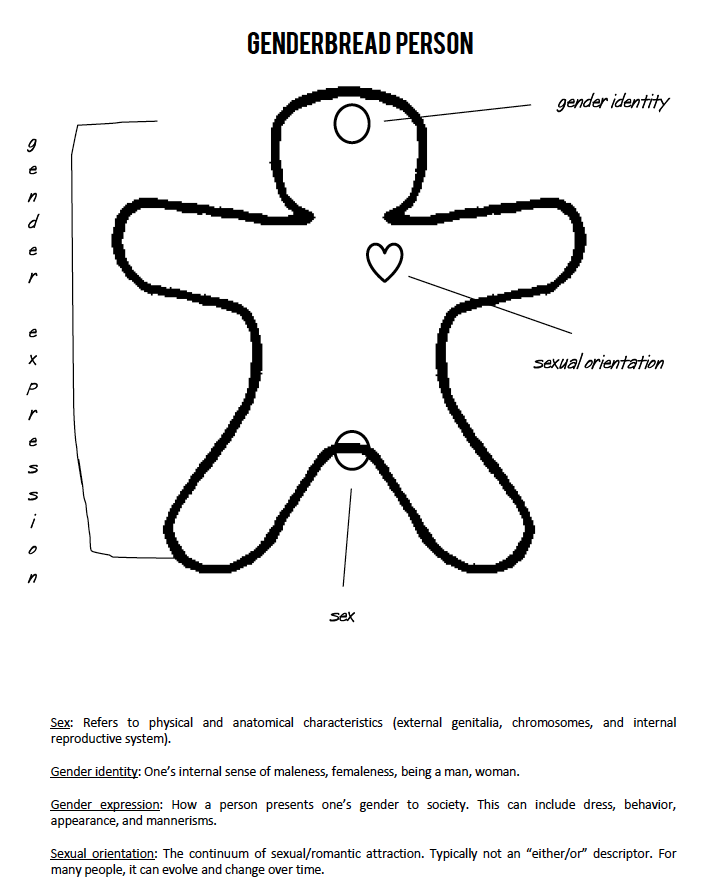 I’m going to give you a really personal example of gender expression. Many years ago I dated a twin. Outward by her appearance she very much fit the stereotypical image of what you’d expect a lesbian to look like, you could even call her a ‘soft butch’ – which yes is an actual term not something I am making up. (A blog post for another day.) Now, while her outward appearance was a bit on the masculine side, she herself was very feminine. While she may have appeared something different to the outside world,  she was very rooted in gender identity as a woman, even though her gender expression was implying something else.

Now to add to this, I mentioned above that she was a twin. Her twin was also boyish in appearance, but was straight. So now we have two sisters, both with masculine gender expressions – but one is a lesbian and the other is straight.

In 29 states in the United States either twin could be fired from their job for being lesbian, gay or bisexual and in 35 states for being transgender. But wait…  both twins could be fired? Yes, you saw that correct. The reason is because in those 29 states you can be fired for being LGBT or being perceived as LGBT. So while twin number two is not part of the LGBT community, she expresses her gender outwardly in a masculine manner, therefore she could be perceived as a lesbian and fired because of it.

Many LGBT rights and civil rights groups worked on ENDA, which is the Employment Non-Discrimination Act. The intention of this act is to make it a law, that companies located in these states cannot fire someone for being LGBT or being perceived as LGBT. There are many statistics that show companies already believe this law exists, which makes this all the more important to get passed. For more information you can check out the Out & Equal Workplace Advocates website, www.outandequal.org/enda

Do you know someone who could use this information? If you liked what you read here, I encourage you to Like it on Facebook, Tweet it to your followers or post it on LinkedIn. All can be done with a simple click below. Thanks!