What is a Gayborhood?
by Jenn T. Grace Business, Can I really ask her that?, Community, Day-to-Day-Life, LGBT, You Might - Etiquette 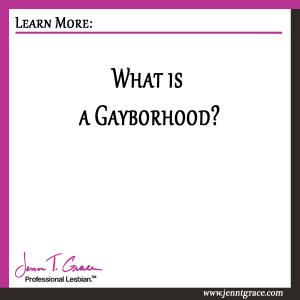 “A gay village (also known as a gay neighborhood, LGBT district, gay district, or gayborhood) is a geographical area with generally recognized boundaries, where a large number of lesbian, gay, bisexual, and transgender (LGBT) people live or frequent. Among the most famous gay villages are Soho in London, Chelsea, Manhattan in New York, the Castro area in San Francisco, Boystown in Chicago, and Nollendorfplatz in Berlin.”

As I was strolling through the Oak Lawn neighborhood in Dallas which is the gayborhood I noticed a variety of interesting things. The first is that I found it interesting that the Oak Lawn area according to Wikipedia is one of the wealthier parts of Dallas. It boasts many professionals and urban types living in upscale townhouses, condos, apartments and duplexes. This information is consistent with data noting that it is common (but not always) for LGBT people to have a higher disposable income. Read more about that here.

A second major thing I noticed, which isn’t too surprising, was the over abundant amount of rainbow signage used in the area. I have written about the symbolism of the rainbow in the past and made statements that putting a rainbow up simply isn’t enough for most businesses (read blog post here). But what I found as I was walking through this area was slightly to the contrary.

In the gayborhood just your mere association with a rainbow flag wielding shop can be of value. Let me explain.

Many stores have a magazine, card rack, pamphlet rack, etc. in the entrances of their establishments. What I found interesting is that there was plenty of literature that you could tell was very specific to LGBT tourism efforts but there was also a mix of LGBT business owners and professional services. Because this information is inside an LGBT-owned or LGBT-focused establishment it is assumed that the information is from another LGBT-friendly person or place.

This is revealing because as someone looking to reach out to the LGBT community, partnering with the gayborhood in your city could become a great value to you. My first word of advice is to always check with your local LGBT chamber of commerce to become a member, get active, get involved and be engaged. But you could take it a step further and build relationships with folks who have businesses in the gayborhood. Find ways to provide each other value. Your brand being associated with theirs, even if it is just on their card rack, could become valuable to you. It could be the start to a good working relationship with the LGBT community and those who live or work in the gayborhood.

I try not to criticize the use of the rainbow in marketing efforts because it is effective in many instances. My message to you is to not rely solely on using rainbow things to show your support for the LGBT community. Be active in the community. Be engaged with the LGBT market. Build relationships with like-minded businesses and start to build your reputation around that. With those few things you can find success in this niche.