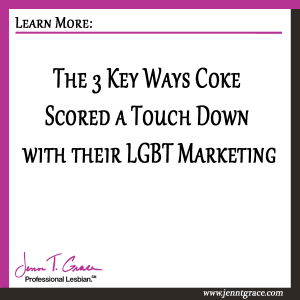 Were you one of the 111.3 million viewers who watched the 2014 Super Bowl? According to Nielsen this was the most-watched U.S. TV telecast of all time. I watched it, like many, just for the commercials. Did you see the gay couple in the Coca-Cola “America the Beautiful” Super Bowl ad? If not, I’m not surprised and guess what? That’s a GOOD thing!

Coca-Cola was met with a lot of controversy over the commercial because of the many languages America the Beautiful was sung in. I’m not here to comment on that other than to say, those who are upset by this are clearly living in a different decade, because last I checked America was built upon diversity – some Americans have apparently forgotten that. I am here to give a tremendous amount of kudos to Coca-Cola, I mean BIG kudos. Why you ask? Because you didn’t see the gay couple in their Super Bowl ad! Are you confused? If so, allow me to explain…

I wrote a blog post quite some time ago called “5 Quick Tips for Effective LGBT Advertising.” Coca-Cola nailed it! Several of my tips for effective gay marketing and advertising include; tailoring your message, being subtle and being inclusive. Let’s touch upon all three and how Coke crushed each –

Tailor Your Message – when I suggest to a company that they should tailor their message I really mean it’s a matter of understanding your audience. Coca-Cola ran this beautiful ad and 111.3 million viewers were their audience. It’s pretty hard to hit home with everyone with such a large audience to contend with. The entire ad was comprised of the diversity of America as a whole, and they demonstrated that LGBT Americans are simply a part of that whole.

Be Subtle – wow did they hit the nail on the head with this one. The gay couple in this ad was so subtle that I had to watch it three times. The second and third time I was specifically looking for them too! I saw someone post on Facebook the NBC News article that said “Coke features first gay family to appear in a Super Bowl ad.” My wife and I looked at each other and I said “There was a gay couple? What ad?” So we pulled it up on her phone and watched together. She exclaimed “I don’t see it.” Neither did I. So I took to Twitter and found another link to the commercial and watched it a third time and then I saw it! The two men with the little girl rollerskating. Brilliant, I thought. I am a Professional Lesbian who was explicitly looking for the gay couple and it took 3 times to find them, it was like searching for Waldo.

Be Inclusive – I am continually talking about Inclusion Based Marketing, a phrase I coined in years ago. Inclusion based marketing is really going out of your way in your gay marketing and advertising to be inclusive of everyone. This commercial from so many angles did just that. America the Beautiful shows that America is filled with diversity of cultures, races, genders and sexual orientations. Coca-Cola kicked some serious ass in this regard because they showed a gay couple as part of the fabric of America. They did it without any fanfare. They didn’t release the commercial ahead of time exclaiming “Look at us we included gay people in our advertising!” They just did it. This is inclusion at its absolute finest!

Now before you crucify me for being naive – I am fully aware that Coca-Cola was very strategic about this. This was not done by accident – this was very intentional. The difference with what they did is that they were strategic and followed all of the ‘rules’ of marketing to the LGBT community.

This is also such an amazing example of what a social world we live in. While the gay couple was so incredibly subtle that even I missed it – social media made sure that I didn’t! Or any other LGBT or allied person connected to the community miss it for that matter!

Want to know a fun little fact? America The Beautiful was written by a young Wellesley College English professor named Katharine Lee Bates, who just happened to be a lesbian. Who knew!? You can check out her story here.