How do you recover from sticking your foot in your mouth?

Home » Can I really ask her that? » How do you recover from sticking your foot in your mouth? 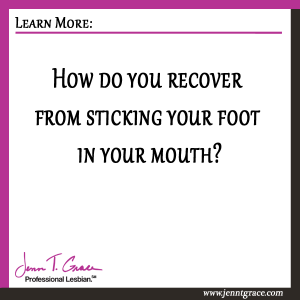 I had the pleasure of previously speaking at the Travel Gay Canada conference in Niagara, Ontario. I had a great time presenting to a crowd of travel professionals who were eager to know how to communicate more effectively with their current and potential LGBT clients.

Towards the tail end of my presentation a woman in the crowd made a reference to being a nervous to say anything for fear that she would commit one of the dreaded faux pas I had mentioned. Another woman in the crowd asked me if she could address the concern so I happily obliged. I’m so incredibly grateful I did – the conversation that ensued was brilliant.

As you know my materials really focus on how you can be authentic in your marketing and general outreach with the LGBT community. Being authentic also means being human and acknowledging when you’ve made a faux pas. But not only acknowledging it but addressing it and owning it.

I’ve stated many times in the past that I have a tendency to stick my foot in my mouth. I think it’s something those around me just now understand is part of the package. When I do it, I own it and I course correct immediately.

So the question really is how do you bounce back from when you’ve made an assumption or a misstep when working with a LGBT client? That’s the question the woman in the audience brought up. She explained that it’s one thing to make an assumption and be totally off base but it’s another to own it and apologize for it, right there in the moment.

This concept of how do you bounce back from sticking your foot in your mouth sparked a dialogue where a handful of people chimed in with their thoughts. It really was brilliant and surprised me a bit that I’ve never addressed this on the blog before.

Let me give you an example. Working with the transgender community can be tricky just like the rest of the LGB community. When you are working with a trans client, it is perfectly okay to ask the person what their preferred pro-noun is (ie. he or she) rather than messing it up. If you go into it saying the wrong pro-noun and see the look on their face is not a positive one, just stop and say “I’m sorry. Do you mind if I ask what your preferred pro-noun is?” The kudos you will get will be well worth it.  Most people would rather you ask the question than go on an assumption that is inaccurate and makes a person uncomfortable instead. It may feel scary to ask someone that and be that straight forward but it’s honestly what you should do.

I go out of my way to explain that you need to be authentic in your communications. Being authentic also means that you are flawed and that’s okay. Let your flaws show through to your LGBT clients. If they see that you are truly genuine in what you are saying and doing, you will gain their respect and hopefully their business.

So the next time you say something you shouldn’t have – think of ways that you can bounce back from it and show your humanity a bit. Your authenticity and transparency will get you far.