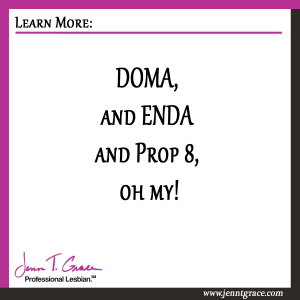 A few years back there was a lot of buzz around the Supreme Court’s repeal of Section 3 of DOMA, the media was atwitter with acronyms and buzzwords that left even some in the LGBT community scratching their heads. To save you the time of researching each one, I’ll explain to you the three common phrases that were bouncing around, and talk to you in brief about their wider implications.

This post is a pre-curser to Part 1 of a 6 part series titled “Marriage Equality is Here: What does your marketing say about your company?”

DOMA – The Defense of Marriage Act. Passed in 1996 by then-President Bill Clinton, this law made it so that same-sex marriages would not be recognized by the federal government (meaning they could receive no federal benefits, including those relating to tax returns, insurance benefits for government employees, and immigration among others), and that no state would be required to recognize the same-sex marriages or unions performed in any other state. Clinton later advocated for the repeal of his own law, and on June 26th, the Supreme Court repealed Section 3 (the section relating to federal benefits) but not Section 2, meaning that states are still not obligated to recognize same-sex marriages performed in other states.

What is the United States v. Windsor case? 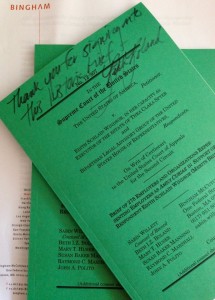 I am proud to be one of the 278 organizations that signed on to the Amicus Brief. Here’s my signed copy from Bingham McCutchen.          Awesome stuff.

United States v. Windsor – The case that brought DOMA down. When Thea Spyer, a New York resident who married her partner in Canada, died in 2009, her widow Edith Windsor was required to pay $363,053 in estate taxes on the inheritance of her estate. Had their marriage been recognized by the federal government, such a tax would not have been issued, leading Edith Windsor to sue the federal government on the basis that the Defense of Marriage Act had literally cost her $363,053 dollars. After the United States District Court for the Southern District of New York ruled in Ms. Windsor’s favor, the case went to the Supreme Court, where it was found that Section 3 of DOMA was unconstitutional under the 5th Amendment’s guarantee of equal protections for all citizens as part of its Due Process Clause.

What does ENDA stand for?

ENDA  – The Employment Non-Discrimination Act. ENDA is a proposed piece of legislation that, if passed, would federally ban any discrimination in hiring or employment on the basis of sexual orientation and gender identity by any company with more than 15 employees.

Prop 8 – Short for Proposition 8, a 2008 ballot proposition to illegalize same-sex marriage, which had earlier that year been made legal by the California Supreme Court. Although the proposition passed 52%-47%, it was later found unconstitutional by the United States District Court for the Northern District of California, a decision that was affirmed by the Supreme Court the same day DOMA was repealed.

Have more questions? Check out these resources.

In episode 6 of the podcast we speculated the implications of Prop 8 being overturned: Listen here to the Expert Interview with Laura Davis of Yahoo! News.