Defining what Inclusion Based Marketing is

Home » LGBT » Defining what Inclusion Based Marketing is 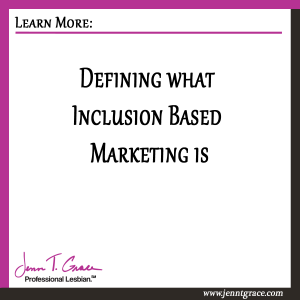 In this post I want to discuss inclusion based marketing. The idea of inclusion based marketing is always on my mind because it is so vital to a successful LGBT outreach plan. In my book I spent quite a bit of time explaining what this is and why it is important. In episode 11 of my podcast I spent time elaborating on this concept as well. I addressed diversity and inclusion and how those two play together in marketing efforts, so if you are an audio person I encourage you to go listen to that episode.

The current trends are pointing to inclusion based marketing and advertising. So rather than isolate a specific audience like LGBT folks, companies are starting to include LGBT couples in their mainstream advertising. Kaiser Permanente was a trailblazer of this trend. In 2011, GLAAD recognized them for “Outstanding Print Campaign – Mainstream Market.” Click here to see the ad. This ad really demonstrates inclusion on so many levels and it ran in mainstream publications.

In recent years, Amazon Kindle showed their support for same sex marriage in a big way. They have a wonderful ad that really shows an LGBT couple being a total non-issue. Watch the commercial below.

2 Responses to Defining what Inclusion Based Marketing is