Have you been offended by being called a lesbian? Read this!

Home » Business » Have you been offended by being called a lesbian? Read this! 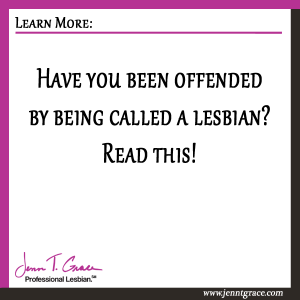 This post around business etiquette within the LGBT community comes from a direct experience I had not so long ago. I am going to start off with the moral of the story, then share the actual story. Moral: If you are offended that someone would assume that you were part of the LGBT community (in an LGBT specific networking environment) then you are networking in the wrong place.

So now the story. I was at an LGBT specific networking event. I was in a three way conversation when one person I was speaking with made an assumption (you know how I feel about those) that the woman we were both speaking to was a lesbian. It was a harmless mistake. Just like making an assumption that I am straight without any knowledge could be perceived as a harmless mistake. I’d rather we not assume anything at all, but it is human nature. Now remember… we were at an event held by an LGBT organization. My opinion here is, if you were ever going to be assumed that you were LGBT in a business setting – it happening at an LGBT networking event might be the place it would occur.

Well this woman flew a bit off the handle over being assumed that she was a lesbian. I really don’t like people making assumptions in general because as I’ve outlined in countless blogs they really do just get you in trouble. However, if someone does assume something, getting very defensive, even irate over it, is not going to help your cause. This straight woman was so appalled that she could be perceived as a lesbian that she was throwing a bit of a tantrum and starting talking badly about the person who made the assumption to many people. It got out of hand pretty fast.

Now pretend you were an LGBT person and a fly on the wall to this scene she was causing. If you are at a networking event, mixing and mingling with LGBT folks and someone is throwing a tantrum over being assumed a lesbian, how would you feel about that person? Does that seem like someone who is trying to do business within the LGBT community in a genuine or authentic way? Do you think that person was really networking there to support the community? OR do you think that person views the LGBT through lenses with dollar signs in them? I personally think it was the latter.

It takes a lot to offend me and even I was offended. This person claims on an ongoing basis how supportive she is of the LGBT community. But as we all know actions speak louder than words. As I started off this blog – the moral of the story is – if you are offended that someone would assume that you were part of the LGBT community (in an LGBT specific networking environment) then you are networking in the wrong place.

If something like this has happened to you – you have two ways of responding.

Understand that people make mistakes and if you are assumed something you are not, it’s not a travesty. Relax. Think of how many LGBT people live their lives every day with people assuming they are someone or something that they are not.

At the end of the day everyone and their business aims to be profitable. The LGBT community is much more attuned to how businesses and people treat their LGBT customers and employees. My word of advise would be to not act like the woman I outlined above at the risk of losing customers over such pettiness. I tell you with conviction that I will not be spending another dollar with this woman, which is unfortunate because she has good products.

3 Responses to Have you been offended by being called a lesbian? Read this!