Deconstructing a Monolithic Myth from a Marketing Perspective

Home » Business » Deconstructing a Monolithic Myth from a Marketing Perspective 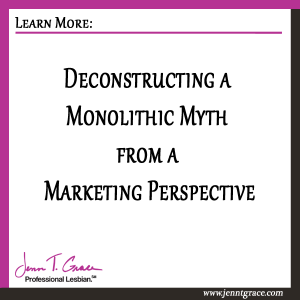 This is a guest post from Melanie McMillan, the Public Relations Director for Keiler (www.Keiler.com)

Guilty as charged. I, a straight woman who works as a public relations professional, bought into the common assumption that gay Americans have a greater disposable income than the rest of the populace.

In my defense, let me explain the root of my misguided thinking. As an avocation, I create tiny bottles of expensive, all-natural artisan perfumes that sell for $150 for a half ounce. And it just so happens that gay men are my best customers.

This does not surprise me in the least. After all, for years I had been reading market research reports about America’s affluent gay population. And I had seen how media portray gay men as well-to-do, sophisticated consumers.

However, this notion of mine, of gay affluence in this country, was completely turned on its head when the president and CEO of the advertising agency for which I work, a very smart and savvy woman who genuinely wants to do the right thing, asked me to research the LGBT market to ensure the agency was being inclusive and not inadvertently engaging in any type of communication that would be offensive or indicate that we were out of touch – and also to see if there might be opportunities for us to serve the gay market.

“This is easy,” I remembered thinking to myself. “These are the people who buy my hand-blended perfume.”

And in the back of my mind, I added, “The wealthy folks.”

I was so sure of what I would uncover during my due diligence.

Did I ever wake up and smell the roses after reading a 45-page report from the Williams Institute, an independent research center and national think tank at the UCLA School of Law.

Here are just a few of the report’s findings:

The forest for the trees

As a marketing professional, I know the dangers of viewing any demographic through a monolithic lens, yet that’s exactly what I had been doing with the LGBT market. My assumption about the community’s affluence – and I have a feeling I’m not alone in my assumption – was based on what was being marketed to me.

My error was completely buying into pop culture and the market “research” being pushed on all of us, when I should have been relying on more holistic data discovered through social-science research.

At Keiler, the agency I work for, we always look for the human connection. Every person on our staff is committed to this philosophy. Sometimes we talk about it, but mainly it runs through our organization like a silent stream. We do not “spin” because it’s not authentic and because we know that, ultimately, spin will not reach the hearts of our clients and the audiences they are trying to reach. We approach every project strategically, because we know that leads to the truth.

As a marketing insider, I believed the hype of my own industry. The Williams Institute’s report jolted me awake and reminded me of the dangers of treating any population segment as a monolith.

After all, if you take a one-size-fits-all approach when communicating to a group, the reality is you won’t effectively reach any of its members.