When is ok to “come out” to your doctor?

Home » Communications » When is ok to “come out” to your doctor? 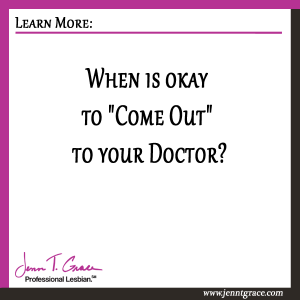 This blog stems from a question from a friend who is a Family Nurse Practitioner (FNP) and has encountered a similar situation a couple of times when treating her lesbian, gay, bisexual and transgender (LGBT) patients.

The document indicates that it is important for the person asking the questions to be non-judgmental and non-moralistic. The document also uses the open ended suggestion of stating “Tell me about your sex life” to a patient. 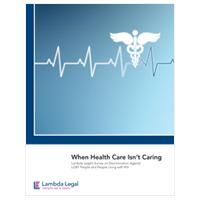 The problem she faces is when she asks about a patients sexual history and they state a simple yes/no or are aloof altogether in answering the question. This is a very common occurrence. Lambda Legal did a study in 2010 titled “When Health Care Isn’t Caring” and found that 73% of transgender respondents and 29% of lesbian, gay or bisexual respondents believe they would be treated differently by medical personnel because they’re LGBT.

Often during this screening she will ask “So are you seeing anyone?” She feels it is gender neutral so it can illicit the right information from a patient, but if the patient answers with a simple yes with no other details she finds the conversation stuck. Her question to me is “What is a good follow up question to find out if the “someone” they are seeing is male or female?”

least resistance. She wants her patients to know that she isn’t going to treat them any differently. This is a tough balance because as a medical practitioner she can’t really talk about how supportive of the LGBT community she is, without the patient ever even mentioning that they are LGBT in the first place. As a professional you can’t go on a hunch that a patient may be LGBT without them actually saying it. So it’s a very delicate balance in getting a patient to feel open and comfortable enough to reveal this personal piece of information about themselves without fearing that they will be judged by their medical provider for who they are.

I find this situation very similar to coming out to someone for the first time (or choosing not to.) This is a very daunting situation for many LGBT people and it happens on a regular basis. Much of our society makes assumptions based on someone’s physical appearance; the way they walk, the way they talk, etc. So on any given day as a LGBT person you may have someone cast a preconceived stereotype or assumption on you. Within a split second you need to decide whether or not you will come out by correcting the persons inaccurate assumption or if it something you’ll ignore because it’s not worth the effort.

Personal Story of Coming Out (or not)

Let me provide an example that happened to me. I was at the hair salon with the woman who typically cuts my hair. This had been maybe the 3rd time she had cut my hair so she didn’t know a whole lot about me and I didn’t know a whole lot about her. (This is not a scenario where she had been cutting my hair for 10 years). This was probably in March (whenever opening day of fishing season is in Connecticut). Anyway – just as she was about done finishing my hair she said “Is your husband a fisherman?” I had to have had a look of shock and confusion on my face. I was so incredibly confused about why she was asking me about fishermen (I do not fish therefore have no idea when fishing season begins). So in my confusion, trying to process rapidly state, I went right over the husband part and on to being a fisherman. It was not an intentional “I don’t want to out myself right now” but more of a general confused moment because of being asked something so random. So after my asking her about fishing season she was done with my hair and I had no clear easy way of going back to say, “oh by the way I have a wife.” As much as I would love to just throw it out there in a “oh by the way” fashion that’s just not my style. When people make the mistake of assuming something and they’re wrong they are often embarrassed and it creates a real awkward moment.

So basically I had my chance to correct her on the fact that I have a wife and not a husband and I blew it. Since I didn’t correct her at the moment (re

regardless of why I didn’t) she would now assume that I indeed have a husband. So it creates that level of awkwardness when you see the person next. It’s not comfortable to just bring it up randomly again and say “Oh remember when I was here last you asked me about my husband being a fisherman? Well I really have a wife.” It’s just weird to me. Please keep in mind that this is my personal experience and personal opinion. There are plenty of other people who would have handled the situation differently than I did.

At any rate – I haven’t been back to that salon since this happened. I didn’t care for her all that much anyway so it’s not a huge loss to me, but it is lost revenue to the business owner of the salon. So one simple misstep on behalf of a stylist cost that salon business. It’s situations like this that happen on a regular basis to LGBT people around the process of coming out. Something as simple as stopping into a bank and having the teller yell “I wish you and your husband a happy Thanksgiving” as you are walking out the door is another example. The person who is being yelled to isn’t going to do an about face, walk back up to the counter, correct the teller and say “Actually I am married to a woman.” It takes too much time out of the day to be doing this over and over again. You have to pick your battles.

Our society automatically places this coming out process burden on LGBT people whether you are going to the salon, starting a new job or making a deposit at the bank. It happens each and every day and business people can take a step in the right direction by not making immediate assumptions about their clients.

This is a similar scenario to my friend who is inquiring about the patients sexual history for the purpose of answering medical questions. With the knowledge that your patient comes out on a routine basis to people may help guide you on how you could better address the situation.

My first recommendation would be to stop asking “So are you seeing anyone?” It’s a little bit too vague and a one word response isn’t going to help you get to the answers you need. The document provides a list of tips for asking about partners. I would say something like this “I talk with all of my patients about their sexual health, would you tell me a bit about yours? Such as are you in a relationship with a woman or man or none at all?” I believe the patient will pick up on the sincerity in your voice and the lack of judgement in your tone. By stating that finding our their sexual history is part of your routine job and merely acknowledging that they could be in a relationship with either sex gives them the option to talk about it and tell you. If you just said “are you in a relationship?” that’s not going to give you enough information. By being more specific by saying “in a relationship with a man or woman” you are giving them the ability to make it easy to speak up.

My second recommendation is to put yourself in your patients shoes. Look at it from their perspective. Your doctor says to you “Are you in a sexual relationship with a man?” It has now been inferred that you are heterosexual. It makes it that much harder for the patient to say “No I’m a lesbian.” It takes courage for your patient to speak up. Especially if we go back to those statistics from above. 73% of trans patients and 29% of LGB fear they will be treated differently. At least if the doctor is asking in a non-judgmental way the patient may feel that they will not be discriminated against.

My third and final recommendation would be to get your hands on some LGBT specific medical information. There are organizations out there that provide LGBT medical pamphlets that you could utilize in your office. It’s a subtle way of telling your patients that they are in a safe place. The patients who need to see it will notice it.

If you are interested in more resources on this topic, the Human Rights Campaign Foundation puts out the Healthcare Equality Index which helps hospitals assess themselves to ensure best practices and that they are complying with non-discrimination requirements, etc. They are rated and the results are published in their report you can download. If you are looking to improve the quality of care for your LGBT patients I would look to this guide as a good starting point.