Are you asking your LGBT customers touchy things? - Jenn T. Grace—Book Publisher, Speaker, and Author
by Jenn T. Grace All Things Transgender, Allies, Business, Can I really ask her that?, Communications, Community, Lesbians, LGBT, Marketing to the LGBT Community, You Might - Plan to Reach 4 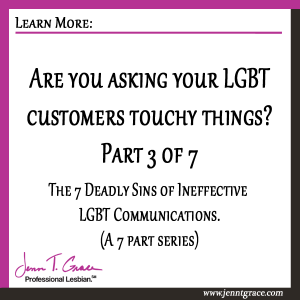 So here is part 3 of 7 in the 7 part series titled: “The 7 Deadly Sins of Ineffective LGBT Communications.” I first introduced to you the idea that I believe 98% of miscommunication blunders occur for one of 7 reasons, which I’ve dubbed the 7 deadly sins.

As a reminder – here are the 7 Deadly Sins (click on the links to read about each): 1. Assumptions 2. Stereotypes 3. Inappropriate Questions 4. Mannerisms 5. Insinuations 6. Implications 7. Assertions

So far we have covered Assumptions and Stereotypes. Now we are going to tackle Inappropriate Questions & Statements, one of my favorite topics! As I say in each post before we get into the meat of the content – I come from a standpoint of believing that most people who make these blunders are coming from a place of good intention. Gay marketing and outreach to the LGBT community requires you, as a business owner, to be authentic, genuine and occasionally vulnerable – to be able to recognize when you’ve said or done something stupid and be able to own it, apologize and move on. In my years of experience I know that this is not something everyone is capable of doing but it is my hope that you can at least try – knowing it’ll make a difference. Asking inappropriate questions and making inappropriate statements is usually a sure fire way to offend someone and I have an example from the news about this particular topic. The key takeaway from this post is – the best way to combat your naivety is to just say you are sorry, learn from your mistake and carry on! It’s actually much easier than it may sound! Read on to see why.

An example of what not to do

Former CNN host Piers Morgan had transgender advocate, Janet Mock, on his show. (Side bar: Janet is an amazing speaker, storyteller and if you haven’t checked out her work, you are missing out – visit her 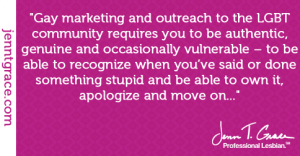 site here). Janet was being interviewed on Piers’ show to promote her book, Redefining Realness. She talks about her life, her brilliant advocacy work and what she is doing to redefine realness for the trans community. But rather than focus on her work as the transgender advocate that she is, Piers Morgan and his show’s producers fell victim to Deadly Sin #3 – Inappropriate Questions/Statements.

There were so many things that went wrong in this interview that I could write multiple blog posts on, but there are three things I want to focus on that are relevant to you, the small business owner. They are:

When you are working with someone from the trans community (this can apply to other people within the LGBT community too), there is absolutely no need to call out someone’s gender identity or gender expression. If I came up to you and identified myself as a woman, a trans woman, in no way should you feel the need to say to me, as Piers did “You used to be, yourself, a man…” – it is completely irrelevant and adds no value to the relationship. I’ve already stated to you that I am a woman and that’s what you should take at face value, not feel the need to make comments about my past- because frankly it’s not your business and shouldn’t be anything to concern yourself with. This type of comment has no place in business.

Really pay attention to the message you are conveying in your written communications. During Janet’s entire interview CNN had a description at the bottom that said “was a boy until age 18.” Piers is trying to say that he is an ally to the transgender community and supports trans people but yet he and/or his producers opted to put “was a boy until age 18” at the bottom of the screen. This statement undermines everything that Janet is trying to do with her book, Redefining Realness. A statement like this comes across harsh and insensitive. The purpose of this phrase was solely to sensationalize her story for media consumption – it does nothing to add value to the story.

Lastly, don’t argue with people. As I stated in the opening paragraphs if you make a mistake, just own it. Piers was so distraught that he was being portrayed as insensitive to the trans community (because he was) that he took to Twitter and got into a fiery and ignorant debate. If you click here you can see a whole description with screen shots of the Twitter encounter. The way Piers conducted himself was very transphobic and he’s outraged that he’d be cast with that impression. Had he taken a different road, ie. one of less judgment and criticism and took a step back and said “Wow, I’m sorry, I didn’t realize how my words affected you and other trans people.” He would have gained so much respect. That’s what you need to do. If you stick your foot in your mouth, just own it, apologize and move on. I wrote a whole blog post with tips on how to recover when you do stick your foot in your mouth, feel free to check it out by clicking here.

In the years I’ve been writing this blog I’ve covered a whole host of fun inappropriate questions or statements. I have pulled out 4 that are my favorites –

As you can see there is no shortage of inappropriate questions, comments or statements made by people with seemingly good intentions. I hope this post has taught you a thing or two! I look forward to you coming to discuss Deadly Sin #4 – Mannerisms. This will be another interesting one to cover, promise!

Can you think of other inappropriate questions or statements that I didn’t list here? If yes, leave a comment below! There is a great chance I will use your comment in a future blog post.

5 comments to " Are you asking your LGBT customers touchy things? "