LGBT customers do not respond to assertiveness

Home » Allies » LGBT customers do not respond to assertiveness 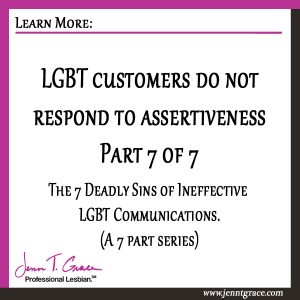 Here we are in the final installment of the “The 7 Deadly Sins of Ineffective LGBT Communications.” I hope you’ve enjoyed this series and it proved to be valuable to you. By now you probably know this entire series came up because of my belief that 98% of miscommunication blunders occur for one of 7 avoidable reasons. The 7 deadly sins we’ve already covered are 1. Assumptions 2. Stereotypes, 3. Inappropriate Questions, 4. Mannerisms, 5. Insinuations, 6. Implications and now 7. Assertions.

Each of these posts has started off with a definition. So let’s define Deadly Sin #7: Assertions. Merriam-Webster defines Assert as –

: to state (something) in a strong and definite way

: to demand that other people accept or respect (something)

I came up with the concept of the 7 Deadly Sins back in 2013 and when I did I included assertions into the list. As this whole in-depth 7 part series has unfolded I realize now that assertions doesn’t really fit the full series as I originally intended it to. But being assertive in an aggressive way does fit into this. So I want to talk with you about how being aggressively assertive towards the LGBT community is not going to help you grow your LGBT client base. Here’s why – a) No one likes a pushy salesperson and b) The LGBT community is often skeptical. Let’s dive deeper.

Does anyone really like the pushy salesperson? Or do they feel guilted into purchasing something they don’t really need or want? No one likes a pushy salesperson. That’s my opinion, but perhaps you think otherwise. So given this series is about miscommunication errors within the LGBT community, this first point is really applicable to anyone.

As someone marketing to the LGBT community you must be knowledgeable of what is going on in the LGBT community. Walking into an LGBT networking event in your home state and having no general understanding of the anti-discrimination policies in your state is not going to do you any favors. So my first piece of advice is be knowledgeable about at least the state in which you live. There are many LGBT people who couldn’t tell you all of the different states stances on anti-discrimination policies so it would be ridiculous to ask that of you. But at least be able to hold your own in a conversation as it relates to your state. 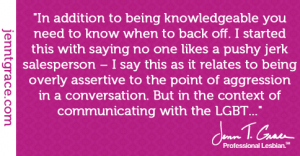 In addition to being knowledgeable you need to know when to back off. I started this with saying no one likes a pushy jerk salesperson – I say this as it relates to being overly assertive to the point of aggression in a conversation. But in the context of communicating with the LGBT community, a) know your facts and b) don’t be obnoxious about sharing them with others. Let me give you a real life example – I was at a networking event with a woman who as an ally to the LGBT community. An ally is someone who is supportive of the LGBT community but doesn’t identify as being part of the community. This woman got herself into an argument with someone in the room because she was hell bent on the number of states with marriage equality laws at the time (we’re all thrilled marriage equality is now the law of the land!). The problem is… she was wrong (off by 2). As I stated above – be knowledgeable. If you don’t know don’t be so blatantly aggressive and pick fights with people with misinformation. I really don’t think this is the approach most people would take but I’ve seen it happen. It really doesn’t help your cause and puts up a vibe that would make you undesirable to do business with.

The LGBT community IS skeptical. As with any of my blog posts I do not speak on behalf of the entire LGBT community, far from. But I do speak based on the information I have from working with hundreds of LGBT people over the years. The LGBT community can be skeptical of those who are looking to jump into the LGBT marketplace. Often it is fear that the person or company showing up and presenting themselves are not doing it in an authentic and genuine way. They are just showing up to tap into the “gay dollar” (more about the gay dollar here.)

Any community has the right to be threatened by outsiders who haven’t yet shown themselves to be honest, transparent, authentic or genuine. These may sound like buzz words but is absolutely the approach one must take in marketing to the LGBT community in a successful way. So if you are showing up to an LGBT event or to any environment where you are trying to market to the LGBT community you need to show your vulnerable side. Let your guard down. Going into the situation with an aggressively assertive demeanor will turn people off and that’ll be the end of the discussion.

My takeaway tip for you today is to really know your story of why the LGBT community matters to you. It is imperative that you understand what I call ‘your why’ – the ability to articulate this to a potential LGBT customer in a non-threatening manner will be the difference between success and failure.

Fortunately I’ve created a 3 part series on “What is your ‘why?’ and why it matters”. Click here for all of the tips and tricks you’ll need to create the best damn why around AND get ahead of your competition too.

I hope you’ve liked this series. If you missed one of the other deadly sins talked about in this series I encourage you to check them out. Here they are again: 1. Assumptions 2. Stereotypes, 3. Inappropriate Questions, 4. Mannerisms, 5. Insinuations, and 6. Implications.