The difference between an Advocate and an Activist
by Jenn T. Grace Business, Can I really ask her that?, Certification, You Might - Business Owner, You Might - Workplace Equality 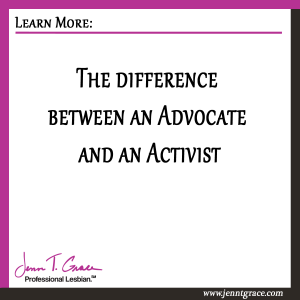 Rather than attempt to paraphrase – below is the best description I found of what the difference between an advocate and an activist are. This was taken directly from the DoSomething.org website.

What is an activist/advocate? What is the different between the two, and which am I?

Activism and advocacy are terms that are often used interchangeably, and while they do overlap, they also have distinctly different meanings. It’s important to remember the distinctions especially if you plan to participate in either activity, so that you know what you’re talking about, and so you know how your actions are different.

An activist is a person who makes an intentional action to bring about social or political change.

Example: Rosa Parks was a civil rights activist who challenged racial segregation in 1955 by refusing to give up her seat on a bus for a white man.

An advocate is one who speaks on behalf of another person or group.

Example: Angelina Jolie is a United Nations Goodwill Ambassador (UNHCR) who uses her talent and fame to advocate for refugees.

Activism, in a general sense, can be described as intentional action to bring about social change, political change, economic justice, or environmental well being. This action is in support of, or opposition to, one side of an often controversial argument.

The word “activism” is often used synonymously with protest or dissent, but activism can stem from any number of political orientations and take a wide range of forms, from writing letters to newspapers or politicians, political campaigning, economic activism (such as boycotts or preferentially patronizing preferred businesses), rallies, blogging and street marches, strikes, both work stoppages and hunger strikes, or even guerrilla tactics.

Because these actions often overlap, a lot of the information that we’ve included can be used by and activist or an advocate. There aren’t always specific lines that separate roles or actions, but you should use these guidelines to come up with a plan for effective action that’s best for your organization or group.

So which one are you? If any? I often refer to myself as an advocate for the LGBT community and am quite proud of that fact. You can advocate on behalf of a small group or large group and make a significant impact as one single person. Remember that you alone can make a difference.

8 comments to " The difference between an Advocate and an Activist "